January Jones remains mum on the subject of her baby daddy, but is opening up about motherhood. Read on to find out how she retains her sense of self while making sure she’s a far better mom than Betty Draper. 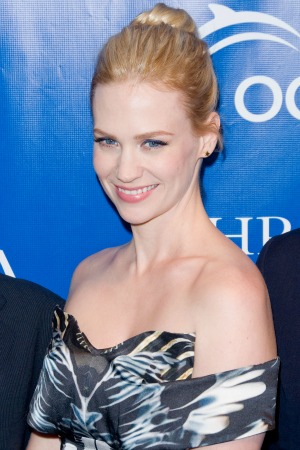 If all you knew of January Jones was her Mad Men character Betty Draper, you’d think becoming a mom would pretty much be the worst idea ever. Luckily that’s not the case. Jones, who gave birth to baby Xander last September, spoke with mom.me about her personal take on motherhood and how different she is from Betty (thank goodness!).

While Jones could probably afford to be a stay-at-home mom for a while (even without the added income of her mysterious as-of-yet-unnamed baby daddy), she chose to go back to work — a choice she said she made to be a better mom.

“I think that as hard as it is, that if you have something that you love outside of being a mother, you should definitely maintain it, because it makes you a better mother,” she said.

Being a better mother than bitter Betty Draper was high on her list of priorities.

“I try not to judge her,” she said. “It’s like she’s a relative you are embarrassed about. I disagree with her a lot… I don’t think I’d be her friend, but I defend her fiercely when someone says something about her.”

“…I certainly don’t take anything from Betty home,” Jones continued. “I have nothing in common with her when it comes mothering. I don’t see it as a burden or irritation. I feel very lucky and I feel like it was something that I was meant to do. I’m at the right age and the right time in my life where it’s just so much fun. And I don’t think Betty sees the fun in that… I think she sees it as an inconvenience.”

That means Jones won’t be slapping little Xander around like she did her on-screen daughter. Good to know! But she says doing so doesn’t make Betty a bad person, because everyone did it in the Mad Men era and beyond.

“…I think people are quick to forget that it wasn ‘t that uncommon. I mean, I was spanked as a kid, and I wasn ‘t born in the ’60s,” she explained. “I think that the show addresses things like that to remind people of their past and how far [we’ve] come. It ‘s a good reminder of what not to do. At the same time we are so rigid and so worried about every little thing now. I had no idea how many warning labels are on kids’ stuff. Everything is warning, warning, warning. You just kind of do the best you can.”

Read the complete interview with January Jones on mom.me.