Only variety hours like the Tonight Show with Jay Leno could bring together the likes of the human Teletubby, Newt Gingrich, and the guidette America loves to hate, Snooki. They’re fist-bumping on live TV, tweeting each other with the excitement of teenage girls — what’s next for the pair? Matching friendship bracelets? 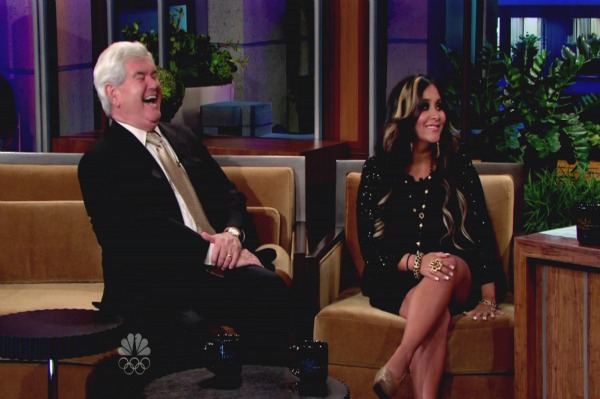 No, you have not entered a parallel universe! It is, indeed, true: This meeting of the minds — Newt Gingrich in this corner, Snooki (real name: Nicole Polizzi) in that corner — occurred on NBC’s Tonight Show with Jay Leno Wednesday.

The polarizing politician and the equally polarizing reality TV maven fist-bumped, and then proceeded to talk strippers!

We can all guess who initiated that one.

When Snooki is a guest on any show, the conversation quickly plummets into the toilet. In this case, the pregnant Jersey Shore star told the world her fiance, Jionni, was allowed to have strippers at his bachelor party.

Snooki — having lost her shame long ago — turns to Gingrich and asks if he was “allowed” to have strippers at his bachelor party before marrying fem-bot (and third wife) Callista.

“No, she was already saying she was crazy for saying she’d marry me,” Gingrich quipped (and we couldn’t agree more). “She figured that was enough for one round.”

And while Gingrich said he had never seen that cinematic greatness Jersey Shore, Politico (via the Atlantic Wire) had just enough time to capture screenshots of the GOP diehard’s Twitter exchange with the littlest guidette before they — poof! — disappeared like Gingrich’s chances at the Republican presidential nod.

Here they are for your reading pleasure:

“I will be on leno wednesday night with Snooki! It should be an interesting evening! I hope she likes zoos and animals!”

“@CallyGingrich is very excited at opportunity to meet Snooki. Should be a great show! Jay has his work cut out for him but it will be fun”

But why’d you have to go and delete the tweets, Newt? We thought things were going so well.

What with the fist-bump, stripper-talk and Snooki’s invite over to the Shore house to try some “Ron-Ron juice,” we through things were going great!

As the Atlantic Wire puts it, you all were just a couple of steps shy of slumber parties on the “official BFF scale.”