You know Fred Willard as the news director from Anchorman, along with a host of other roles — from Best in Show to Modern Family to Everybody Loves Raymond. Now you also know him as the “guy who was caught doing the Pee-wee” some 20 years after Paul Reubens became a punchline after a similar incident. 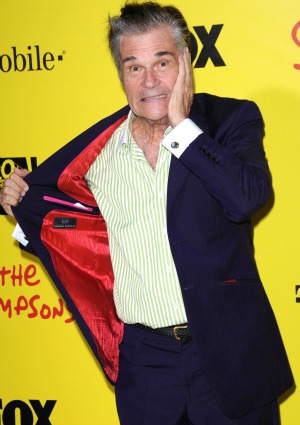 Allegedly, “undercover vice officers” caught the 72-year-old Anchorman star with his pants down and his little Willard exposed at the Tiki Theater in Hollywood.

The gossip site reports he was in and out (of jail) in no time.

Apparently, these officers were on a “random walk-through” of the premises when they found a famous face in a compromising situation.

When these types of theaters get a license, officers can come and go to inspect the facility as they please, so says TMZ.

Paul Reubens (better-known-as Pee-wee Herman) found that out the hard way in 1991. The star of the children’s show later went on to become everybody’s favorite punchline, following a similar arrest in a Florida theater.

Willard, too, often takes on roles as wacky and unassuming, yet lovable, characters.

He’s rumored to appear in The Yank (no joke). IMDb reports the film is in pre-production and follows an Irish-American, Peter Murphy (played by Willard), who goes to the Emerald Isle to find love.

While the 70-something has a lengthy list of Hollywood projects to his credit over the course of a career spanning nearly five decades, he never seemed “overexposed.” That is, until now.