We have cut-throat reality TV contests for craft gurus and shows for Z-list celebs (here’s to you, Niecy Nash). Now, we can add banned-from-baseball’s Pete Rose to the list of sorta-stars getting their own show, courtesy of — you guessed it! — TLC. 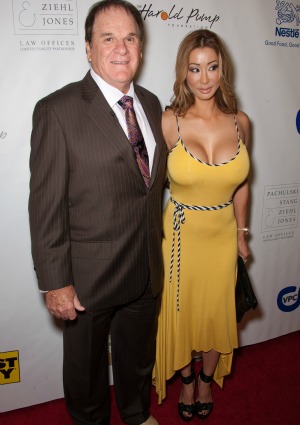 TLC is helping Pete Rose in his quest to remain relevant by carving out this gem of a new reality show: Pete Rose and Kiana Kim Family Project.

WTF? The biggest “project” here is for TLC.

First, they have to get viewers who eat up fare like 19 Kids and Counting and Toddlers and Tiaras to give a crud about a 70-something ex-baseball player.

Second, “Who the heck is Kiana Kim?”

You’ll remember Rose was a baseball star with a gambling problem — not the other way around.

Despite being the “hit leader,” Rose is banned from baseball and will never be inducted into the Hall of Fame.

Rose apparently never got the memo that you’re “not supposed to bet on baseball games” while managing an MLB team.

We don’t think Rose and his well-endowed fiancée will be hitting this one out of the park.

Listen to the “content” of the masterpiece set to debut later this year (by way of Entertainment Weekly): “The show will follow the 71-year-old Rose and his thirtysomething model fiancée… through their daily lives as they try to blend their families.There are some challenges along the way. A few family members are apprehensive about the relationship.

“And while Rose is based in Las Vegas (where he signs baseball memorabilia) or is on the road making public appearances, Kim and her two children live in Los Angeles.”

“She’s got younger kids and I’ve got (four adult) kids, and we go through the same things everybody else does: taking the braces off, making sure they get their education and they go to basketball practice or acting class,”  Rose told EW.

And, of course, along the way there’s lots of talk about Kim’s boobs as they follow her breast reduction surgery. Yawn.

Rose insists, with a straight face, that it’s “not going to be classless.”

“It seems like a lot of reality shows aren’t really reality, but our reality show is going to be funny, entertaining, and real,” he adds.

You don’t say, Pete Rose? No doubt a reality show revolving around you is going to be classy!

Look at your prior work: throwing an awesome career away by gambling on baseball, wrestling in a chicken costume on WWE at the millennium, presumably when the $$$ from autographs ran low…

This show has class written all over it.