The singer is busy working to lose weight to be an inspiration to other mothers. 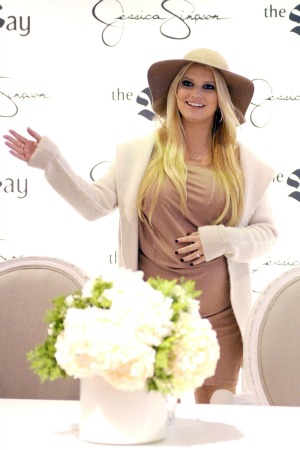 After giving birth to daughter Maxwell Drew on May 1, Jessica Simpson’s baby weight has been quite the topic of conversation.

On June 23, Simpson tweeted a picture of her body, or at least two very important parts of it, to her Twitter followers. Less than a week later, a rumor was circulating that Weight Watchers had given Simpson a deadline to lose her extra weight. Simpson had recently signed on to be their new spokeswoman.

“Just so everyone knows…Weight Watchers hasn’t put ANY pressure on me!” Simpson tweeted early in the morning on June 28. “I’m trying to be as healthy as I can be for myself and I feel great!”

Weight Watchers felt it was equally important to respond to the claims. While no figure has officially been released, estimates of Simpson’s Weight Watchers paycheck could be in the range of $3 to $4 million.

“Weight Watchers is in it for the long haul,” says a spokesperson to People. “We’re with her 100 percent as she develops a whole new relationship with food and activity.”

For Simpson, almost three months after giving birth she is more motivated than ever to lose the weight, for her health and her future with her daughter.

“For me, I really want to do something that is a lifestyle,” the 31-year-old singer told People. “In the past I’ve been known to yo-yo diet.”

A friend of Simpson’s talked to People, affirming the idea that Simpson, as well as Weight Watchers, knew it wouldn’t be an overnight process.

“She understands it’s a process,” said the friend. “[She is] working very hard and she’s excited.”

While Simpson does have the Weight Watchers contract to motivate her, she seems to be working to lose weight for herself. She said that all new mothers face that moment when they want to lose those last couple of pounds, and she is becoming an inspiration for them.

“I think anybody who’s gone through a pregnancy,” she said, “after they have the baby, it’s like, ‘I need to do something about this.'”