Shake Bouchon is determined to play it straight, even if he has to move to Belize to escape his criminal past. Unfortunately, murder and mayhem find their way to his little restaurant on the beach, and Shake is soon on the run and working a scam. Things might turn out okay… if he can figure out how to stay alive long enough to see the plan through. 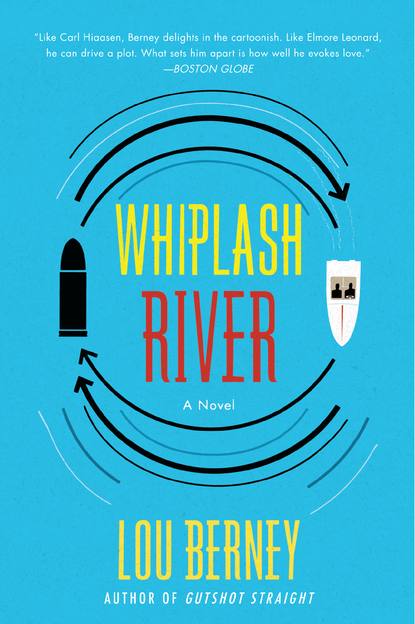 Charles “Shake” Bouchon served his time, freeing himself from U.S. authorities and the Armenian mob. Now living on Ambergris Caye, off the coast of Belize, he stays busy running his small restaurant, keeping his TripAdvisor ratings high and swimming in the ocean. His only real problems are paying back a loan to Baby Jesus, the local drug lord, and trying to get over his ex-girlfriend, Gina, whom he left behind in California.

Everything changes the evening a man named Quinn comes in for dinner and narrowly misses being gunned down, thanks to Shake’s quick thinking. Unfortunately, the botched hit sets up a chain of events that draws Shake into an international scam and makes him a target for a host of people working on both sides of the law. Will Shake be able to dodge them all, win back his girlfriend and still come out a few million richer?

Lou Berney’s Whiplash River is a zany, action-packed thriller that you’ll find hard to put down. From his escape off the island to his tortuous journey to the Mideast, Shake must stay alert to stay alive. Saddled by his new BFF Quinn, who never tells the whole truth, and counting on Gina, who hasn’t yet forgiven him for their breakup, Shake isn’t sure he’s going to survive the gig.

Whiplash River showcases Berney’s skills at creating wonderfully flawed characters who have a knack of getting themselves into scrapes they can’t always get out of. As Shake twists and turns around the obstacles, his unwanted retinue is sometimes left to fight it out among themselves. Bodies, theft and clues are strewn across continents, while Shake, Gina and Quinn attempt to see their get-rich-quick scheme through to the end. Neither Shake nor the reader can predict the outcome — Berney keeps you guessing until the very last chapter.

Fun, exciting and deadly, Whiplash River is not to be missed.