How did Tom Cruise and Katie Holmes break the news about their divorce to daughter Suri Cruise? This hilarious video — produced by Jest.com — is probably a lot closer to the truth than we realize.

Ever wonder how Tom Cruise and Katie Holmes broke the news about the divorce to HBIC daughter Suri Cruise? Well, we think the crew over at Jest.com about hit the nail on the head with this video. In short, we assume they talked a lot about contractual obligations and nannies, but we also think they promised her more designer dresses and possibly another amazing tree house.

Also, the dude in this video should become a professional Cruise impersonator — spot on impression.

The explanations are over now — and Cruise is left to “pick up the pieces” after Holmes full court offensive divorce. The actor — spotted enjoying a helicopter ride today — got his first chance to hang out with Suri since Holmes filed divorce papers on June 28.

Why did he wait so long? Work obligations, a source says.

“He’s wanted to see her as fast as possible since this started,” the source told People, adding that his filming schedule on Oblivion was a big factor. “He couldn’t shut down production, cost people their jobs. People count on him.” 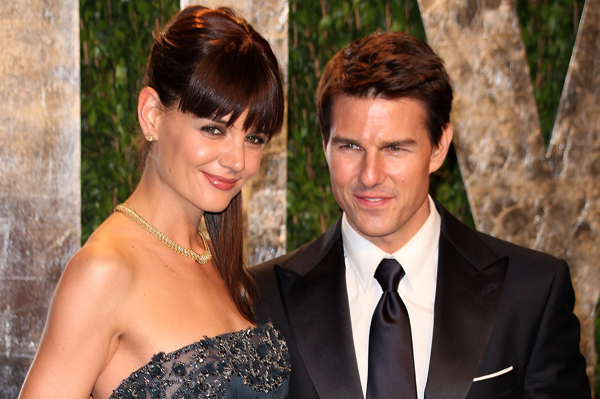 These days, he’s leaning on his older children, Connor Cruise and Isabella Cruise, for support.

“He adores Suri, but now he’s afraid he won’t be able to have a close relationship with her,” an insider told US Weekly. Though the couple agreed to joint custody, it’s obviously Holmes who is in charge of all things Suri.

“Katie wants to make sure the visits are in the context of him being a parent figure,” the source continued.

The divorce hasn’t left Cruise too heartbroken, though: RadarOnline alleges that an unknown actress, Yolanda Pecoraro, will be the 50-year-old actor’s next girlfriend and, likely, wife. Why her? The 27-year-old is a devout Scientologist, of course.

“[Pecoraro is a] Scientology princess, perfect for Tom,” a source told the website. They reportedly hooked up in 2004 and even took in a soccer game in Madrid, accompanied by David Beckham and Victoria Beckham.

“With the embarrassment his divorce has caused the church, they want to stabilize the situation quickly,” a source said.

“They also want to show that Tom has rebounded fast and that his new wife is beautiful and steeped in Scientology. If the church decides to make Yolanda Tom’s next wife, they’d certainly want her to have a child soon. So she could quickly be going from her modest apartment to a mansion in Beverly Hills with a baby on the way. And there’s little doubt she’d do what’s best for the church.”

Pecoraro denies the whole thing, telling the National Enquirer that she lives with boyfriend in a modest Silver Lake, California apartment.

“Yes, I knew and still know Tom Cruise. And no, I’m not married or engaged,” she said.