What would you say if someone walked up to you and asked, “Hey, do you want to perform with Brad Paisley? How about open up for Reba? After that, are you cool touring with Lady Antebellum?” Uh, yes! That’s a no-brainer, right? 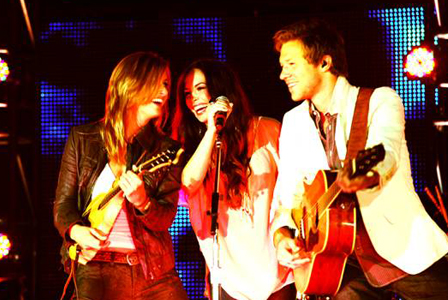 Most aspiring singers and bands would do anything to open up for their idols. Well, for Edens Edge, this to-die-for-fantasy (if only I could sing…) became their reality after being signed by Big Machine Records. Since then, the trio has worked with some of the biggest country stars we can only dream of meeting (and touching! Just kidding… kind of). Hannah, Cherrill and Dean of Edens Edge told us what it was really like to work with Brad Paisley, Reba McEntire, and Lady A — Brad even performed with them on the opening stage! I swoon…

SheKnows: All right, so we’ll get right to it. How was it working with Brad Paisley?

Edens Edge: (Dean) It was awesome! We had such a good time. We have a lot respect for Brad Paisley as a performer, as a songwriter, and as an artist, so it was so awesome with him for our first tour. We really got a taste of one of the greats of country music. He also likes to have a good time on the road, so we had a good time.

SheKnows: What is one of your best memories of touring with him?

Edens Edge: (Dean) A lot of times, Brad will come out on the opener’s stage and do a song with the opening artists. … We had heard that he might come out, so we got prepared with one of our favorites of his songs, “Whiskey Lullaby.” … When Brad came out on stage, … we sang that with him, and then he invited the three of us out on his stage (to) play for his audience, so we did… We played “Whiskey Lullaby” out in the middle of his crowd. He had a small stage in the middle of the crowd, so we all went up on stage… It was just amazing.

(Hannah) We recently did a feature with billboard.com and we were on their home page the other day, so that was pretty exciting, and we did an acoustic cover of “Whiskey Lullaby.”

SheKnows: Perfect, yeah. I actually saw it, it was awesome! Reba is so many people’s inspiration and has just done so much over the years. How was it working with her?

Edens Edge: (Hannah) Reba is absolutely amazing! She is a total gem of a person. I just learned so much from her, we all did. Just characterwise, we were so inspired by her spirit. And as a performer, she just isn’t like any other; she is just on point every night… After an entire day, over a two-hour show for her, she comes straight off stage, goes into her dressing room, touches up her makeup for 2 seconds, and then sits down with us… to do an interview with her. We were interested in knowing about her life and how she does what she does… We actually put that on YouTube and our social networking sites… That is just a small example of how amazing she is and how she represents what country music is all about, family, roots groundedness … she truly is that girl that came off that farm from Oklahoma to live out her dreams. That is just a huge lesson for the three of us.

SheKnows: That’s awesome. You guys have gotten to play with and learn from so many huge names like Lady Antebellum — they are getting humongous, how was it working with them?

Edens Edge: (Cherrill) It was really fun. We actually met them several years ago. Our former drummer, Chris, … was out on the Paisley tour with us and eventually ended up being engaged to Hillary. We played a few fair dates with Lady A and opened for them, so we just became really good friends with them and they, I guess as things started going for us, the signing of the label, they asked us to come out on their winter tour which is awesome, and they are such fun people. We got to see how hard they work, they write every day! They have people working together in the back of the bus just writing.

SheKnows: Not a bad group of people to become friends with.

SheKnows: What do you have coming up next?

Edens Edge: (Hannah) we have our new album out. We released it three days before we went on the Rascal Flatts tour. We’ve been on that tour and we’ll be on it until the end of October actually, which we’re excited about, and we finally got our album out there. It’s a pretty big deal.

For other up-and-coming bands, check out…