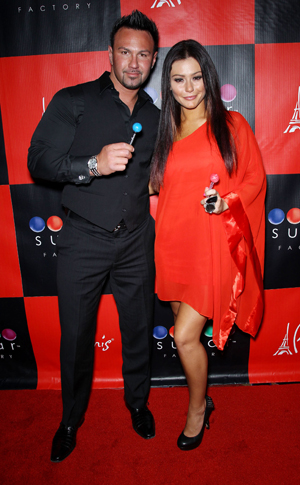 Jenni “JWoww” Farley has been with her hulk of a boyfriend, Roger Mathews, for a couple of years now. Are they thinking about marriage? Yes, but only under one condition.

Is she joking, or serious? We’re pretty sure she’s being 110 percent honest about that big ring, but it’s not like they’re running to the altar anytime soon. “[Roger’s] dad is dying for us to get married,” the tattooed reality star added. “He wants grandchildren. He texts me almost every day for that.”

“There’s no rush… no trophy for being first,” Mathews added. “But do we want to get married? Oh, yeah. Absolutely.”

The pair already lives together, just like Snooki is living with her fiance and baby daddy, Jionni LaValle. However, those two aren’t the only Jersey Shore roommates shacking up: Famous fighting couple Ronnie Ortiz-Magro and Sammi “Sweetheart” Giancola will shack up together after they finish filming this season of the hit MTV reality show.

“We actually went to look at apartments this weekend, and found something, [so] we are moving to New York [City],” Ronnie told HollywoodLife.com earlier this week.

As for Snooki, she’s getting ready to become a mother — and she’s getting more and more concerned about what happens when she gives birth to baby boy Lorenzo.

“Did you poop?” Snooki asked Kelly Ripa during her Wednesday appearance on Live! With Kelly.

“No… I have never pooped ever,” the mom of four deadpanned back.

Hey Snooks: There’s not a lot you can do about what happens during labor, so just embrace the poop, okay?