Michael Vick is about finished with the terms of his parole, meaning he can now own pets again. So, is he planning to get a dog? Find out what he told Piers Morgan Tuesday night on Piers Morgan Tonight. 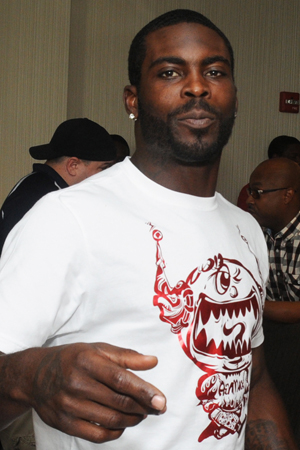 NFL quarterback Michael Vick sat down with Piers Morgan on Tuesday night for a tell-all interview about his conviction — and subsequent two-year prison sentence — for operating a dogfighting ring on his Virginia property.

The biggest change in Vick’s situation? He’s almost done with the terms of his parole, meaning he’ll legally be able to own another dog. So, will he? His scary answer: Yes.

“I can’t take that dream away from [my kids],” he told Morgan. “That’s selfish on my behalf.”

However, Vick goes much further in an interview with NBC Nightly News, set to air Wednesday night. Basically, he wants a dog to help rehab his own image, too.

Sad end for one of Michael Vick’s dogs >>

“I would love to get another dog in the future. I think it would be a big step for me in the rehabilitation process,” he said. “I think just to have a pet in my household and to show people that I genuinely care, and my love and my passion for animals; I think it would be outstanding. If I ever have the opportunity again I will never take it for granted. I miss having a dog right now. I wish I could.”

Wow. Why not do more to help the dogs you did have, Vick? It seems like he’s still thinking about himself, even five years after his arrest. And as for the whole dogfighting thing? Vick described to Morgan how seeing his first fight changed him for the worse.

“I didn’t know dogs would react in the way that they did,” he said. ” Thought it may seem intriguing, you know, nobody ever said it was not the right thing to do or that it was wrong.”

“You only go off what you see at such a young age,” he added. “As I grew up, I continued to think that, you know, it wasn’t any consequences behind it or that I would never get in trouble for it.”

Sad ending for all-star fight to save Lennox the dog >>

As for the type of dog Vick would get? “It certainly wouldn’t be a pit bull,” he told Morgan with a slight smirk.

Does Michael Vick seem remorseful for what he did?