It’s official: Kevin Richardson has rejoined the Backstreet Boys for a new album and appearances starting later this summer. So, what’s it like making music together after all this time? 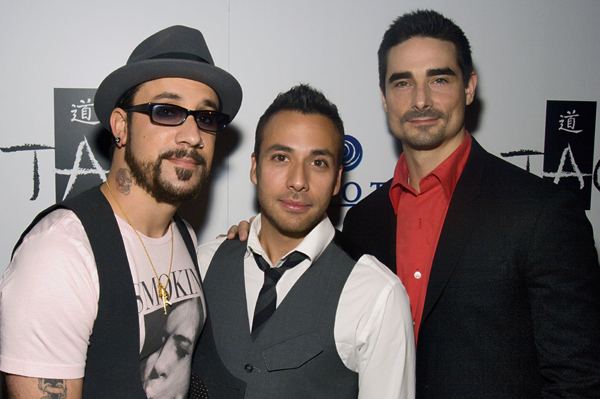 It’s official: Kevin Richardson is back with the Backstreet Boys for good. The oldest member of the boy band officially rejoined the group because he knew that fans want it that way — the group was incomplete without him.

Richardson is back with the group that made him famous after a nearly seven-year hiatus. The group is currently recording a new album — and living together! — and will perform at Good Morning America‘s summer concert series in August.

Nick Carter gets the world’s most ridiculous haircut >>

“We’re going to be coming to perform for you guys on August 31,” father-to-be AJ McLean said on GMA. “The first time together, all five of us.”

The five guys are apparently living together in London while recording the new album. So, are the “brothers” fighting? “We wake up. We have breakfast together. We’re not sick of each other at all,” Nick Carter said. “It’s awesome. It really is. The vibe is fantastic.”

Richardson’s homecoming isn’t exactly news to dedicated fans. The singer, now 40 (yes, 40!), left the group in 2005 to perform in the Broadway musical Chicago, but he alluded to the reunion during an interview with Ryan Seacrest last fall.

“I would love to perform with them again on a more regular basis,” he said in October 2011. “Our chemistry when we come together just feels like old times.”

Now it’s reality — and the new BSB album is slated for release next spring, the 20thanniversary of their first album. They’re also slated to get at star on the Hollywood Walk of Fame later this year.

So, how do the rest of the guys feel about having Richardson back? “We couldn’t be happier to have our brother back with us,” Carter said. So, there you have it.

Are you excited to see the Backstreet Boys together again?