Some Twitter users (known as “Tweeps”) are proclaiming this week’s release of No Doubt’s first original music in 11 years as the “best day” of their lives. Erm, OK. While not going quite that far, many of you were no doubt yearning for the days before Gwen Stefani went through her Harajuku phase. 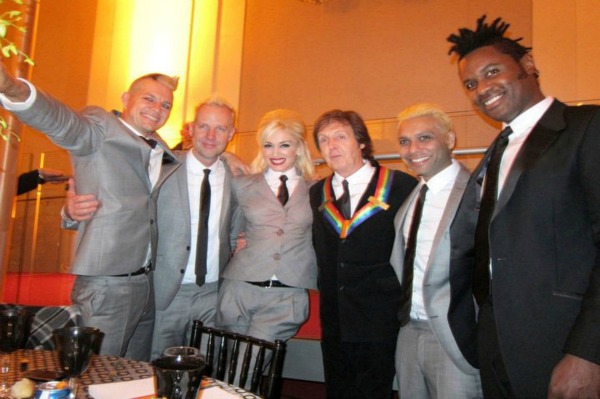 Call it the “year of resurrecting hot bands from the early- to mid-90s.”

First, Backstreet Boys announces their reunion. Then Spice Girls. Now, No Doubt is giving a taste of its first album in 11 years.

That “taste,” courtesy of the six-minute video featuring the song, “Settle Down,” is also getting some promotional help from none other than Lady Gaga.

She tweeted to her 27 million followers: “@nodoubt single ‘Settle Down’ is out. I just bought it! Go get it its so good! Band formed the year i was born! 1986 baby.”

Now that many of us feel really old, while the group released some remastered recordings of hit songs as late as 2004, their last album featuring original songs was 2001’s Rock Steady. Can you believe it?

Early (perhaps premature?) reviews are in…

So far, the music mags and celebs appear to be singing the praises of the single.

While Japanese-inspired, Spin appears to the think the video has found a balance and doesn’t go too far with the Harajuku stuff.

“Directed by Sophie Muller, who has previously helmed some of the band’s best videos, the well-executed clip feels like a homecoming of sorts, as the band members embrace each other, and Stefani struts around in those kinds of tank tops she once made her signature,” the mag said. “But it also, in a way that Stefani’s most recent solo album — and, frankly, most new music by ’90s standbys — does not, looks remarkably of the moment.”

The single features band members traveling by separate trucks to reflect on their meeting up again after more than a decade. And Rolling Stone says this vid is making “truck stops cool again” (though we can’t remember when they were “cool”).

“In it the members of No Doubt reassemble in the form of a trucking convoy, which meets up to perform the bouncing new cut in the parking lot of the coolest, most rocking truck stop you never stopped at on your family road trips,” the publication contends.

To the celeb part, Rachel Zoe said she’s “Obsessed!” with the new single, while everyone from Garbage (who also has a new album out, Not Your Kind of People) and Paramore front-woman Hayley Williams also tweeted their shout-outs to the group from Cali.

You can see the video here. You can also check out the reunited group this Sunday during the Teen Choice Awards.

But you’ll have to wait until Sept. 25 to get your anxious mitts on the rest of the album.