Sofia Vergara works hard for her money. Her talent as an actress and entrepreneur has made her one of the richest stars in Hollywood. According to Forbes Magazine, Vergara is the highest-paid woman in television. 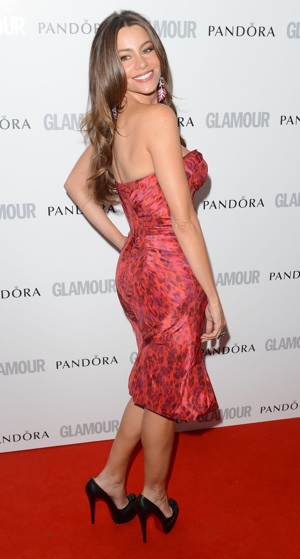 Last month, Forbes released a list of Hollywood’s highest-paid film actresses. Twilight‘s Kristen Stewart took the top spot raking in $34.5 million, which she accumulated over the past year. Now, the ladies of television are getting their time to shine.

How does Hollywood’s highest-paid actress spend her dough? >>

Wednesday, the magazine revealed what TV actresses are rolling in the most dough. Who received top honors? It’s none other than Modern Family hottie Sofia Vergara! The actress has played Gloria Delgado-Pritchett on the ABC hit for the past three seasons, and it’s proven to be quite profitable.

Forbes reports that Vergara earned over $19 million last year. But let’s be clear, that’s not all Modern Family money. Vergara is a businesswoman who has her hands in multiple endeavors.

She has a popular clothing line, endorsement deals in both Spanish- and English-language countries, a burgeoning film career, plus a talent company she co-founded in 1998 called Latin World Entertainment.

A source inside the firm (Latin World Entertainment) pegs 2011 revenues at $27 million — with a healthy profit margin near 20%. Clients include Disney and Paramount; their YouTube channel, NuevOn, premiered in April and immediately sold out ad inventory to Procter & Gamble through 2013.

Kim Kardashian crowned Entrepreneur of the Year by Glamour >>

Following in Vergara’s fashionable footsteps is Kim Kardashian who clocked an estimated $18 million, which came courtesy of her multiple TV shows, endorsements, clothing and fragrance lines.

What do you think of TV’s Top 10? Are you shocked?