The X-Men star had a scare Tuesday night while filming the thriller, The Hive, alongside co-stars Abigail Breslin and Mr. Jennifer Hudson, David Otunga. 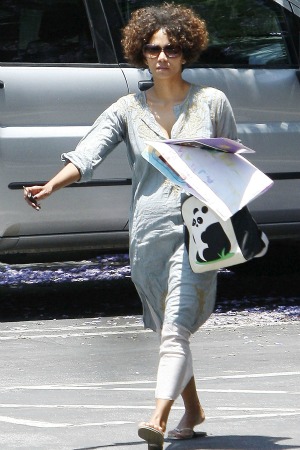 Like Kristin Chenoweth before her, Halle Berry was rushed to the hospital Tuesday night following an on-set accident.

Berry’s publicist confirmed the 45-year-old suffered a head injury while shooting a fight scene for The Hive.

Though her publicist isn’t saying, TMZ reports the actress hit her head on the concrete after taking a nasty spill.

“After Halle fell, she started throwing up, and that’s when people around her became alarmed and called for help,” sources said, by way of TMZ.

Apparently, their sources thought she suffered a concussion — just like rapper DMX did last weekend.

Nausea and vomiting are symptoms of such head injuries.

Unlike DMX, Halle didn’t take a four-wheeler on a joyride down a hill.

By way of other sources on the set, X17 speculates the Academy Award-winner may have been “hit by a falling object.”

The good news is, the star is doing fine.

“She was taken to the hospital as a precaution, but she checked out healthy and was released. She’ll continue production as planned,” her PR rep said Wednesday morning.

It’s no surprise the kick-butt star bounced back so quickly. After all, it’s not her first rodeo.

MTV reports a series of other on-set accidents for the actress and mom:

• 2002 — injured her eye while filming Die Another Day

In 2011, she also broke her foot. But we can’t call put that in the “on-set” category. The accident happened during a day off from shooting Cloud Atlas.

Whew! Here’s to hoping Berry can stay out of the hospital long enough to at least see The Hive wrap before embarking on another project — Shoe Addicts Anonymous. Sensible shoes, please, Halle.