The X-Factor host opens up about gaining self-worth after a childhood of bullying led her to cause emotional and physical harm to herself. 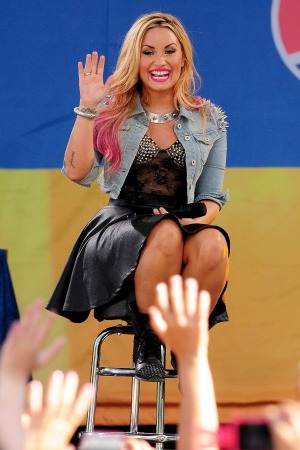 In 2010, Demi Lovato checked into a treatment center for “emotional and physical issues,” but before now, has not spoken about the emotional problems that led to the visit.

“There were times I felt so anxious, almost like I was crawling out of my skin,” she told Self magazine, “that if I didn’t do something physical to match the way I felt inside, I would explode.”

The emotional anxiety led her to harm herself physically, which is what eventually led her to get help for her disorder.

“I cut myself to take my mind off that,” said Lovato. “I just didn’t care what happened. I had no fear.”

The problems started when she was just a pre-teen, and the victim of bullying.

“When I was 12, I was bullied. It wasn’t physical, but sometimes I’d say to the girls, ‘Hit me! What you’re doing verbally and online is so much worse,’” she told the magazine. “That’s when a lot of my issues spiraled out of control. The things they called me will stick with me for life.”

But Lovato said the constant abuse only helped her become who she is today. She is now 19 years old and it could be said she is at the height of her career. She is currently a judge on The X-Factor and a Disney star.

“Going through that also made me stronger,” she said. “Mean comments don’t affect me the same way because I’m more confident. If I read something where someone calls me a bitch, I know I’m not, so I laugh at it.”

Lovato also has help with her problems now after going through the treatment. She said she has to remind herself each day to feel good about herself, unlike those without her disorder.

“I make time for myself and meditate,” she said. “I’ve spent the past two years getting over an eating disorder and issues like self-harming and bipolar disorder. I have to work on this stuff every day. I’m reminded of that whenever I eat or feel down.”

The changes Lovato has gone through have helped her relate to other people in her situation, and even make friends. She found an unlikely camaraderie in another X-Factor judge.

“Britney [Spears] is such a sweet girl! We’ve gone through a lot of the same things, so we have a connection,” she said.

The new season of The X-Factor is filming now and will air this fall.