The two actors are going on a campaign tour to promote their new movie, just in time for election season. 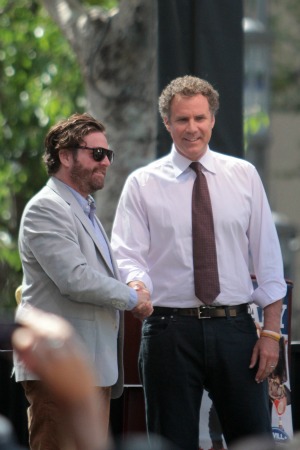 When Will Ferrell and Zach Galifianakis signed up to be in a movie together, people knew it would be a comedy combination unlike any other. But now, the duo is going beyond the movie and on tour together.

In The Campaign, “Ferrell plays veteran congressman Cam Brady, whose frequent womanizing, binge-drinking and foot-in-mouth commentary have zero effect on his electability until an inexperienced local, Marty Huggins (Galifianakis), steps up to challenge him,” said USA Today. “The gloves come off quickly when their campaigns get down and dirty.”

But Ferrell and Galifianakis are taking the next step together and have embarked on a fake campaign tour.

This morning, the two actors set up on a red, white and blue stage on the first day of their tour, said the newspaper.

“Thank you for coming out to the historic Grove,” said Ferrell.

Galifianakis is already finishing Ferrell’s sentences. He responded with: “Where even the homeless people are fake.”

The tour included speaking at the podium, somewhat in character, in front of media and fans.

“I’m kind of a fish out of water when it comes to the political game, and I think Will’s character is very savvy at it,” said Galifianakis to USA Today.

The timing of the movie wasn’t an accident. With a presidential election this year, the movie is meant to poke fun at the campaigns happening up to election day in November.

“With the state of how crazy politics are getting, we thought it would be a very timely and funny way to kind of make fun of politics,” said Ferrell.

But what would Ferrell do if he did decide to run for office one day?

“I would do exactly what the congresspeople are doing right now,” he said. “Nothing. I’d just hang out in Washington, go to great restaurants.”

The tour runs through the end of July and makes stops in St. Louis, Dallas, Chicago, Seattle, San Francisco, Boston, Toronto, Philadelphia, and ends up in Washington DC.

The Campaign hits theaters on August 10.