E! News host Giuliana Rancic and her husband, Bill Rancic, are set to welcome a baby boy via gestational surrogate in a few short weeks. Find out how they’re planning to protect their unborn child’s health by banking his cord blood. 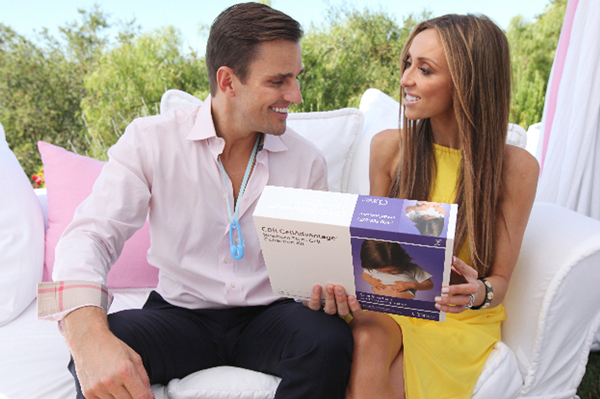 It’s no secret that Giuliana Rancic has faced an uphill health battle over the past year, given her breast cancer diagnosis in fall 2011. She’s managed to beat the disease and is set to welcome a son with husband Bill Rancic come later this summer.

Naturally, her health battles have turned her into a seriously health-conscious person, especially when it comes to her unborn child. That’s why the E! Fashion Police host — and her hubby — are planning to bank their son’s umbilical cord blood when he’s born in September.

Why keep the cord blood? It’s full of healthy stem cells that are “used to treat certain cancers, blood disorders, metabolic disorders, and immune diseases,” according to the Cord Blood Registry. “Cord tissue stem cells have shown the potential to heal spinal cord, cartilage, and brain injuries in early-stage research.”

Giuliana was inspired to bank the cord blood after her sister did it with her own child, and now the reality couple has decided to become ambassadors for the organization. The Cord Bank Registry gave them a banking kit during their recent baby shower.

“So thankful 4 all the fab baby shower gifts! Looking forward to banking w/@CordBloodRegistry like my sister did!” she tweeted after the shower.

At least that’s settled, because the growing family will be super-duper busy over the next several months: They’ll be traveling all over the country after their son is born and they’re in the process of building a house.

“We found a great house. It’s in the final stages of construction, so I’m there every day getting that finished. So we hope to be moving in in the next three weeks. We have everything (for the nursery) but it’s just kind of sitting there waiting to be put in. The nursery’s ready to go!” Bill told US Weekly recently.

Will Baby Rancic be a frequent flier? Nope! The family will be traveling via tour bus, Bill said.

“The baby won’t be born in L.A., he’ll be born in Colorado. So we’re going to go from Colorado to Chicago and then spend September and October in Chicago. And then we’ll come back to the West Coast,” he said.

“I’ve got a tour bus taking us from Denver to Chicago,” the daddy-to-be added. “Everyone is pumped! Not just our family but so many people. We’re so lucky. So many people have been pulling for us and following our journey. This has all been magical for us.”

Do you agree with Bill and Giuliana Rancic’s decision to bank their son’s cord blood?