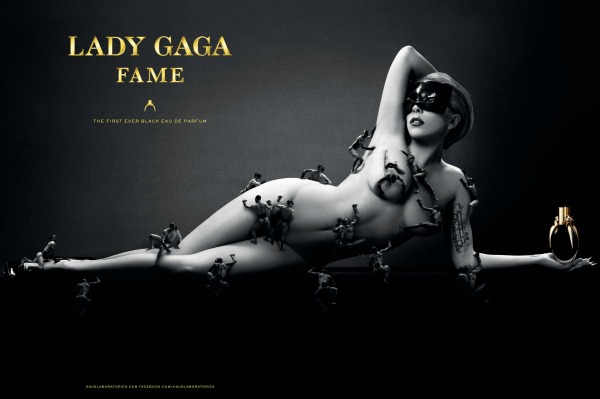 Lady Gaga’s perfume ad would like to have your attention, please! Successfully making headline waves around the Web, Lady Gaga tweeted the naked image of herself (one mask and a handful of mini-men don’t count as clothes) to help spread the word her Fame perfume has arrived.

“The First Ever Black Eau de Parfum,” Lady Gaga wrote to her Little Monsters, noting the image was shot by photographer Stephen Klein.

Black perfume is indeed correct, as it turns out Fame does appear that very color inside the bottle. Once spritzed, the fragrance (ingredients as listed on the bottle: “tears of belladonna, crushed heart of tiger orchidea with a black veil of incense, pulverized apricot and the combinative essences of saffron and honey drops”) turns clear.

“i won’t lie I’m a bit nervous,” Lady Gaga tweeted before debuting her nude/mini-men photo. “its been a while since i’ve shared some work with you. But i’m so proud of Steven+I, we really did not sleep!”

The description of Lady Gaga’s perfume is a far cry from what she told the press she was concocting back in 2011: “[Blood and semen] is in the perfume but it doesn’t smell like it. You just get sort of the after feeling of sex from the semen and the blood is sort of primal. And the blood was taken from my own blood sample so it’s like a sense of having me on your skin.”

Can’t get enough of naked Lady Gaga and her mini men? Be patient. The print campaign will be seen in September issues of the major fashion magazines, while a television commercial and three-minute film are also in the works.

Mini-men may look good on Gaga (what doesn’t?), but the Fame perfume pictured in Gaga’s hand almost looks almost like an afterthought!

Are you a fan of Lady Gaga’s perfume ad?