Mark Consuelos is set to join American Horror Story season two. Awesome! But, that’s about all we know, sadly. 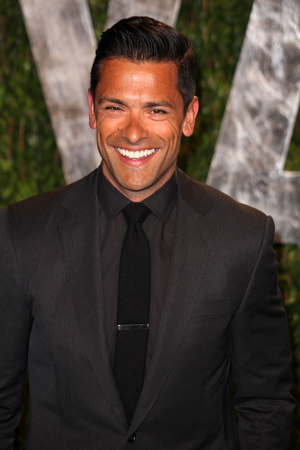 As if we could be any more excited for season two of American Horror Story.

Mark Consuelos, formerly known as Mateo on All My Children and currently known as Kelly Ripa’s husband, is set to star in season two of the hit FX show. The actor joins Adam Levine, Chloe Sevigny, Chris Zylka and returning stars Zachary Quinto and Jessica Lange on the horror show, now slated to take place in an East Coast mental institution.

Not much is known about Consuelo’s character — creator Ryan Murphy likes to shroud things in secrecy — but we’re sure it’ll be both sexy and horrifying at the same time. Plus, how can anything turn out bad when his sexy mug is onscreen? The answer: It can’t.

What we do know: The show will be completely revamped for the new season — and season one star Jessica Lange will switch from playing a dark obsessive woman to a nun.

Mark Consuelos’ stripper past is no rumor, Kelly Ripa says >>

Levine isn’t spilling too much about his character, either — he’s too scared of Murphy, he joked.

“I’m newly married, and I go with my wife on our honeymoon,” the Maroon 5 front man teased to MTV. “I don’t want to tell you too much and it and actually I should shut my mouth because [Murphy] will freak out, but it’s gory… it sounds like so much fun and that’s why I wanted to do it. I was like, this doesn’t even sound like acting; this sounds, like, hysterical, funny, dark and cool and right up my alley.”

Minear admitted that he wasn’t sure about signing up for the show before the runaway hit first season.

“We thought it would be cool. I mean, the truth is, when I first met with [creators] Ryan Murphy and Brad Falchuk about the show, I came in, I read the pilot script, and I’m like, ‘OK guys, this is all very well and good — I don’t know how you make this into a TV show. I don’t know how you sustain this,’ ” Minear recalled to MTV News.

“And Ryan immediately had the answer, and that was, ‘Oh, the way we sustain it is by the end of the season, we have killed off every character.’ And I’m like, ‘I’m in!'” he said. “The reason we’re doing it in the 1960s is because that fits the story that we want to tell.”

Season two of American Horror Story is slated for October 2012. We. Can’t Wait.