TMI alert: One Direction likes to get touchy with each other during concerts. Why? It “makes the girls scream.” Uh, what? 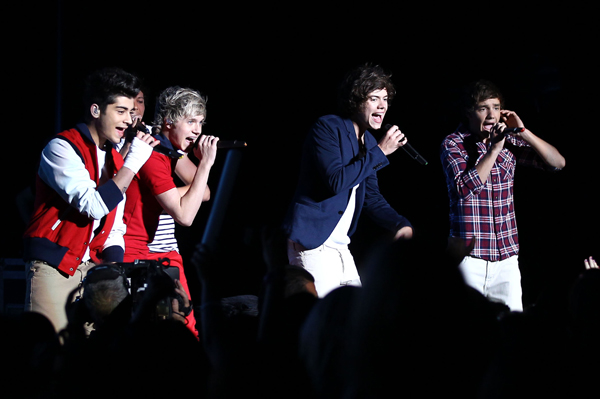 Boy bands and other teen singers are supposed to do stuff that makes their pre-teen fanbase swoon — it’s just part of the job description. However, One Direction seems to think that grabbing each other’s “bulges” is a way to make the ladies scream.

Note to the Irish boys: It doesn’t.

Where is this all coming from? The boys did an interview with radio station Mix 101.5 when the interviewer brought up some photos that showed the boys grabbing each other’s packages.

Justin Bieber has the One Direction infection >>

“[It’s] just to make the girls scream,” Niall Horan explained. “We do it for a laugh.”

We get it, boys — both young and old — have an obsession with their junk. That doesn’t mean the girls feel the same way. But, we digress. They didn’t stop there, though: The boys then talked about who has the largest bulge, which is disgusting for this adult female writer to even think about, given that the boys are all teenagers. Just so you know, it’s Harry Styles.

“Harry’s got some next level crotch,” Horan added. “He’s got some crotch bulge going on there!”

Good to know — and they wonder why more guys don’t come to their shows?

“We want to see more boy fans, as seeing them in the crowd is cool. It’s 90 percent girls, but we want to expand our fanbase. We want different people to like us,” Horan told Storyboard recently.

Joking aside, it seems like the group really appreciates their fans.

“It’s very flattering obviously as we can see how much they care for us. We just hope they’re crying tears of joy! None of us could obviously ever have imagined this just two years ago. I don’t think anyone could have seen this coming to be honest,” Horan said.

“I don’t think there is anything hard about having such a dedicated fanbase. It is actually great to know that there are people out there that love what we do since we put so much hard work into it.”

Watch One Direction talk about their junk