Nadya Suleman, better known as “Octomom,” called it quits on her stripping gig in Florida before it even started — or so we thought. When the staff of one club humiliated Octo before her first day on the pole, she just moved on to another club. 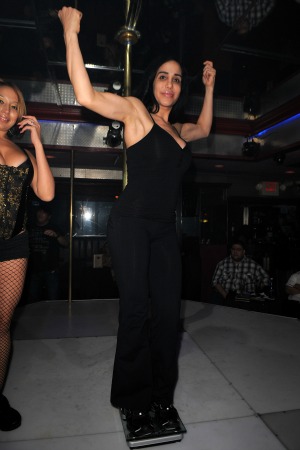 Octomom made her pole dancing debut this past weekend at a Florida club. Now she’s being sued by a rival club for breach of contract.

Back in early June, the mother of 14 pulled the plug on the pole work shortly before her first day at T’s Lounge in West Palm Beach.

Could she have had a changed of heart, for the sake of her young brood?

Nah. Turns out she was just catching a lot of heat from the staff, who told the CBS affiliate in West Palm Beach gems like: “She must be a little crazy, normal people don’t have that many children…” and “She will be going topless, and down to a thong maybe a couple of shows, she gets comfortable and we get to see more.”

Suleman freaked and ended up taking her treasure trove of goodies to the Playhouse South Gentleman’s Club in Hallandale.

ABC News reported that around 400 people showed up at the gentleman’s club (we’re guessing that’s a lot for the Playhouse).

Shirts were even sold that read: “I saw Octomom naked at the Playhouse South.”

While not completely in the buff, the mere fact that the 37-year-old is dancing at the club (and drawing such numbers) has irked the owner of T’s Lounge, who claims she signed a contract to perform exclusively at his club.

T’s isn’t missing out on much, apparently, from the talent perspective.

In what could be on the shortlist of top quotes for the year in entertainment news, a fellow stripper had this to say to the Miami Herald, by way of ABC: “She’s really stiff. Oh my God, she can’t dance. But it’s good for the rest of us girls because she made it a busy Friday night….”