The singer sent out a nice note to the band after they released their new single today, which started a friendly (albeit, public) chat between the two singers. 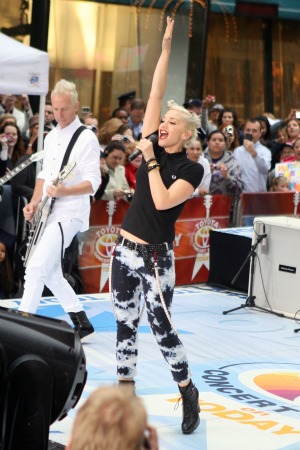 Today, she tweeted to her fans what she thinks of the new No Doubt single.

The age thing sure puts things in perspective. For the band No Doubt, this is their first studio album in 11 years.

Gwen Stefani, lead singer of the band, wrote Gaga back an hour later.

“Wow gaga muffin thanks for the shout out that’s big! Kiss from one Stefani to another! Gx,” she said. In case you are confused by the message, Stefani Germanotta is Lady Gaga’s real name.

The conversation continued, as Gaga wrote back to Stefani one more time.

“I love watching you guys light up the charts. I’m feeling nostalgic today because of this,” she responded.

This is not the first time that Lady Gaga has tweeted about the new album. Back on July 6, she wrote: ““Is anyone else freaking out about No Doubt putting out a new album. I can’t wait!”

According to MTV, the band will play the song on July 22 on the Teen Choice Awards, July 26 on Late Night with Jimmy Fallon and Juy 27 on Good Morning America.

The album Push and Shove also has another Gaga connection. Mike Stent, the album’s main producer, has also recorded albums with Lady Gaga, among others.

Lady Gaga is up to quite a few things these days too. She is releasing a new fragrance in August and her Born This Way Foundation just announced it will be partnering with Office Depot to help youth grow up feeling confident about themselves.

Push and Shove is set to be released in the U.S. on Sept. 25. The video for “Settle Down” is now up on the band’s website.