Nothing is off limits in the Cyrus family: Miley Cyrus often shows us her boobs — er, at least the sides of them — in cut-off tops. Well, now dad Billy Ray Cyrus is getting in on the fun by tweeting a picture of a bloody Braison Cyrus in a hospital bed. 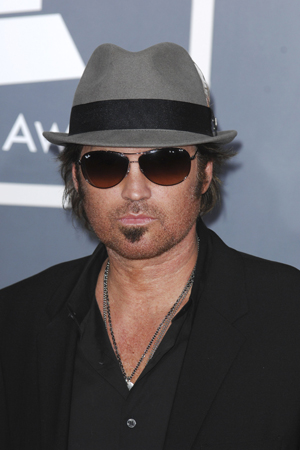 Your child suddenly starts bleeding profusely from his nose: What’s the first thing you do after you take him to the emergency room? Well, if you’re Billy Ray Cyrus, you tweet a picture of your bloodied son to your 895,000 followers.

Seriously: The “Achy Breaky Heart” singer tweeted a photo of his son, Braison Cyrus, clutching a bucket full of his own blood.

“Today was actually the most horrific day of my life. Honestly, I can’t sleep because I am scared,” Braison tweeted after the hospital visit Saturday. He explained that the blood came from a tonsillectomy he had last week.

“Not sure what happened exactly but long story short my artery opened and I was bleed[ing] a lot,” he added. We’d say.

Billy Ray is clearly happy that his son is okay, too. “Thanking God and all the fine doctors nurses and staff at Providence Saint Joseph hospital. Been a wild 24 hours but bringing my son home,” he wrote.

Guess all parents have to take embarrassing photos of their children from time to time — but a bloody photo? No, thanks.

Billy Ray might be at hospitals a lot more in the coming months: His engaged daughter, Miley Cyrus, reportedly wants to start making babies with fiance Liam Hemsworth — the sooner, the better.

“Hemsworth is said to (be) a strong motivating factor in the singer’s pregnancy plan, given the fact that his older brother, Chris Hemsworth, welcomed daughter India in May,” a source told US Weekly. “They are both mature and ready for this. Miley is 19 going on 40.”

Really? We’re not friends with too many 40-year-olds who go in public without a bra and pants. More power to her, but why the rush to have kids?