The two legendary musicians went over their curfew in Hyde Park, so Live Nation shut off their mics before the show was supposed to be over. 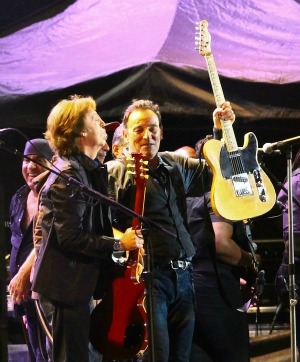 If you were Paul McCartney or Bruce Springsteen, you might think rules don’t apply to you. Rightly so.

But Saturday night, the two rockers had their mics turned off after going over curfew at a concert in Hyde Park in London.

According to the Associated Press, Springsteen had exceeded the 10:30 p.m. curfew by a full 30 minutes during his set. And then he invited McCartney back on stage.

“[Springsteen] welcomed McCartney on stage and the pair sang The Beatles hits ‘I Saw Her Standing There’ and ‘Twist and Shout,’” according to Associated Press. “But the microphones were turned off before they could thank the crowd, forcing them to leave the stage in silence.”

The concert promoter Live Nation released a statement saying that authorities had set the curfew “in the interest of the public’s health and safety,” said AP.

Live Nation said they wanted to comply with this.

The residents around the park have been complaining about the concerts. Next year both the number of concerts, as well as capacity for each concert, will be reduced.

“English cops may be the only individuals left on earth who wouldn’t want to hear one more from Bruce Springsteen and Paul McCartney!” Steven Van Zandt, a member of Springsteen’s E-Street Band, wrote on Twitter. “On a Saturday night! Who were we disturbing?”

He then went on to complain about the city itself. According to AP, he said, “There’s no grudges to be held. Just feel bad for our great fans. … It’s some City Council stupid rule.”

All eyes are on the city right now as the Olympic games begin in just days. The mayor of London told a London radio station the legendary musicians should have been able to finish their set.

“It sounds to me like an excessively efficacious decision,” said Mayor Johnson. “You won’t get that during the Olympics. If they’d have called me, my answer would have been for them to jam in the name of the Lord!”