Charlie Sheen is proving he’s not just plain crazy — he’s crazy generous, and loaded to boot. The actor has made a record-breaking donation to the troops! 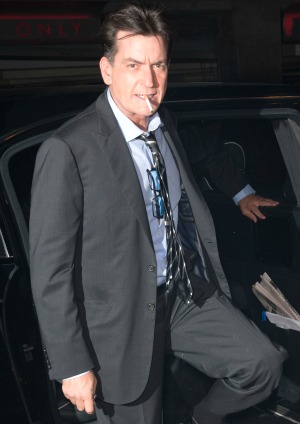 Charlie Sheen’s $1 million donation to the troops is one for the record books. The actor, known more for unpredictable antics and shocking interviews than his craft in recent times, is polishing up his image with a major bit of do-gooding.

Charlie Sheen announced Monday that he will donate $1 million to the United Service Organizations (USO), which will go toward the USO’s Operation Enduring Care, an ongoing campaign to support wounded, ill and injured troops and their families.

“It’s an honor for me to be able to give back to these men and women of the military who have done so much for all of us,” the actor said. “They put their lives on the line for us every day, and I’m just happy that my work on Anger Management can bring a little bit of relief to the troops and their families.”

Yet, while the donation is certainly generous (TMZ notes Sheen’s $1 million will be the largest single contribution the USO has ever received from an individual), it’s only a fraction of what the 46-year-old could pull in this year. The money is pledged to be one percent of his profits from Anger Management, a minimum of $1 million.

Last October, Forbes named Charlie Sheen the highest-paid television actor around, reporting that he’d raked in $40 million between May 2010 and that same month in 2011.

Percentages aside, the U.S.O is thrilled to be the recipient of the star’s crazy generosity.

“The USO would like to thank Charlie Sheen for his very generous $1 million donation to our Operation Enduring Care Campaign and his interest in helping us lift the spirits of those who have endured so much to protect the freedoms we enjoy daily,” Gen. John I. Pray Jr., executive vice president for the USO, said. “His support is greatly appreciated, especially from our wounded warriors and their families.”

A round of applause for Charlie Sheen’s $1 million donation to the troops?