Somebody flipped the script on Jennifer Lopez and Steven Tyler! The now former judges of American Idol apparently didn’t get the votes they needed from the network to stay on the panel. Here are our suggestions for other ways to shake up the ratings-stalled show. 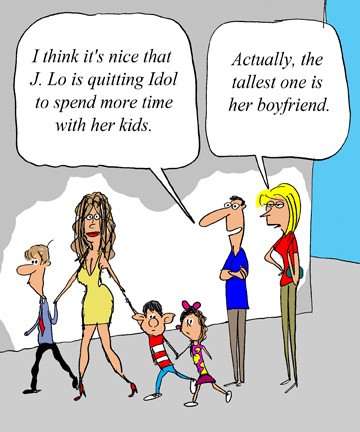 I, for one, shed an internal tear upon learning of Steven Tyler’s decision to depart. He provided the levity the show desperately needed amidst dramatized ballads and Randy Jackson’s overuse of the word “dawg.” The wacky rocker simply knocked our socks off with his nonsensical commentary — really, who can say things like “It’s as clear as the balls on a tall dog” and “I love every bone in a woman’s body, especially mine” on air and get away with it? So, in light of the somewhat incoherent lothario leaving, we propose you replace him with another someone who can keep us in stitches. Not in the Paula Abdul kind of way… we were laughing at her, not with her. Our pick? The eternally witty Betty White.

Add an Average Joe to the mix

Half of my time watching American Idol is spent scratching my head over the judges’ feedback. Are they listening to the same singing we are?! For the love of Cher, throw an Average Joe on the judges’ panel so we can hear at least one opinion that mirrors our own. And, since we’re pretty sure we’d be great at the job, give us a shot at our fifteen minutes of fame — have some sort of “win your chance to be a judge on American Idol” contest for we plebeians who can’t carry a tune in a bucket but know a good song when we hear it.

Were Steven Tyler and Jennifer Lopez asked to leave Idol? >>

Crown a king and queen

In the beginning, American Idol churned out powerhouse female winners like Kelly Clarkson and Carrie Underwood. Nowadays, not so much. Can we even remember the last time a female took top honors? Oh yeah, it was Jordin Sparks… five seasons ago! As the show’s fanbase of fanatical tweens and teens with unlimited texting has grown, a distinctive trend has surfaced — the good lookin’ guys get all the votes. It seems as though, when forced to choose, the little ladies of the audience will continue ponying up their picks for the heartthrobs. Whatever happened to girl power?? Let’s level the playing field by eliminating the battle of the sexes, thus crowning both a king and queen of the show.

When the judges interrupted Jessica Sanchez’s “singing for her life” song to give her the season’s only save, many people cried ratings conspiracy upon watching the seemingly scripted scene. Any way you cut it, the judges’ save makes the show look rigged. We normal folk deal with disappointment daily — nobody offers us a free pass. That special vote would be better served by allowing the audience to vote off a judge at each season’s end. Since the show has been playing musical chairs on the judges’ panel the last few seasons anyway, producers should save themselves the trouble and lend the audience the upper hand.

Throw down the gauntlet

If all else fails and American Idol’s ratings continue to drop — even with rumored replacement judges like Mariah Carey and Aretha Franklin — we can offer one other surefire suggestion for getting viewers to tune in to the talent show. Instead of having contestants sing one last song for a save, toss them into an obstacle course à la Wipeout. We’d much rather see heads bouncing off those big, red rubber orbs than suffer through another nasally rendition of a Whitney Houston megahit.