Madonna can’t say she wasn’t warned, as it appears radical French politician Marine Le Pen is making good on a threat from early June to sue the pop legend. 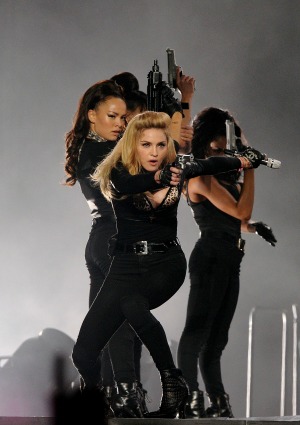 On Sunday, the spokesperson who represents Le Pen’s National Front party said the far-right contingent would be filing a lawsuit against Madonna in French court next week for alleged “insults.”

So what has the political party and its leadership so fired up?

The evening before the National Front let their intentions be known to the Associated Press, Madge went ahead with her now infamous “swastika stunt” on French soil.

During a concert in Paris, Madonna presented the same video montage that got her in hot water with Le Pen before.

In that video, Le Pen is seen with a swastika etched on her forehead.

She told you so, Madge

In early June, Le Pen threatened to sue the 53-year-old pop star, following her use of the video during a concert in Tel Aviv.

She also took a jab at the star’s age and questionable star power: “She’s an old singer. She no longer knows what to do to get people talking about her because her songs don’t work anymore.”

Looks like Madge may have been more shaken by the age-related insult than the actual lawsuit threat, because she went ahead and showed the inflammatory video again — on Le Pen’s home soil Saturday.

A political party with a big image problem

No doubt the video touched a nerve for the party in particular, as the National Front has long been associated with racism and anti-Semitism.

As the “new face” of the party her father Jean-Marie started, it’s been widely reported there were high hopes that Le Pen could revamp its image.

But the AP reports the 43-year-old has “maintained a hard line on immigrants, saying France has too many and criticizing many Muslims, in particular, for insufficiently assimilating into French culture.”

As can be expected by such a stance, anti-racism groups like SOS Racisme have come to Madonna’s defense.

On Sunday they, too, issued a statement, commending the artist for her “resolutely anti-racist and feminist discourse.”

The MDNA Tour also has tongues wagging for, when the music legend’s not bashing Lady Gaga, she’s showing off a little too much of those “womanly charms.”

According to the New York Daily News, 50-something arse and nipple were also on full display during the recent Stade de France show in Paris that’s got the National Front so miffed.