Miley Cyrus may only be 19, and her engagement may only be a month and some change old. But the ex-Disney star and her fiancé, actor Liam Hemsworth, may be adding more than another dog (they have five) to their young family… sooner rather than later. 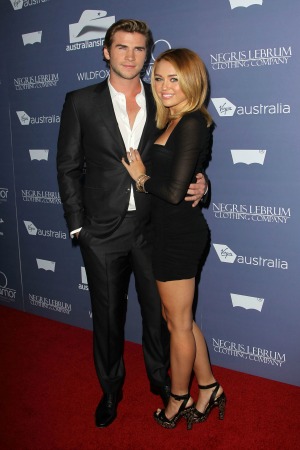 It seems like only yesterday (maybe because it pretty much was only yesterday) that Miley Cyrus announced she was getting married to her beau of three years, The Hunger Games star Liam Hemsworth.

Now Us Weekly claims the young couple is already talking babies, and Miley isn’t necessarily the one hatching the plan.

“Hemsworth is said to (be) a strong motivating factor in the singer’s pregnancy plan, given the fact that his older brother, Chris Hemsworth, welcomed daughter India in May,” a source close to the Cyrus family told Us.

At 22, Hemsworth is three years’ his fiancée’s senior. But the couple had been dating since meeting in 2009 on the set of The Last Song.

Liam even lived with the Cyrus family for a short time, so insiders say they already consider him like family.

And the couple want to expand that family quickly, according to the close source.

The baby buzz comes right as Miley is making some buzz for comments she made about the paps on Twitter.

“How is it legal for men I’ve never seen before to sit in front of my house and then follow me around! So shady and scary,” she tweeted.

If a baby is in the future for the famous pair, Cyrus has more of the same to look forward to.

And in other Cyrus family news…

Also on Twitter, Miley’s famous dad, Billy Ray, posted a gross-out pic (i.e. not for the faint of heart) of the singer’s younger brother, Braison, in the hospital.

Looks like the 18-year-old is doing fine now after this weekend’s scare.

As to what could cause so much bloodshed, Braison had this to say on his Twitter page:  “I got my tonsils out last week. Not sure what happened exactly but long story short my artery opened and I was bleed a lot. All good now.”

Between his son’s health scare and all this baby talk, let’s hope dad isn’t the next one in the hospital.