The fourth installment in the popular Ice Age series takes out Spidey with its iceberg of laughs for No. 1 this week at the box office. 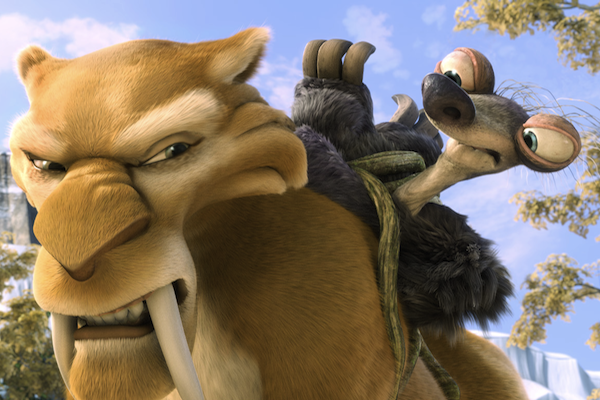 Ice Age: Continental Drift, the fourth installment in the popular Ice Age series brings back Manny, Sid and Diego for more chilly arctic adventures this summer. The animation voiced by Ray Romano, John Leguizamo and Denis Leary (who also makes an appearance in The Amazing Spider-Man) ranks in at No. 1 this week with $45.5 million in box office returns, according to Deadline Hollywood.

That brings the webbed hot boy Andrew Garfield as The Amazing Spider-Man to No. 2 this week with $35 million at the box office. The Spider-Man reboot has earned more than $200 million domestically since it opened during the Fourth of July holiday week. Go Spidey!

The Mark Wahlberg and Mila Kunis romantic comedy about a man-child who is still besties with his teddy bear, Ted, came in third with $23 million. The film’s writer/director Seth MacFarlane, who also created the popular TV animation Family Guy, was reported to have said at Comic-Con this weekend that a sequel was not out of the question. Sorry, Mila, it looks like your man still likes stuffed animals…

Disney/Pixar’s story about a fiery red-headed princess who balks when her parents pressure her to get married continues to resonate with fans, bringing in $10.9 million. That brings Brave to No. 4 this week at the box office.

The based-on-a-true-story tale of male stripping, Magic Mike, comes in fifth this week with $8.5 million at the box office. Channing Tatum stars as the stripper with a heart of gold who wants nothing more than to get out. How about Pretty Man for an alternate title? We don’t think Julia will mind.

Tyler Perry’s Madea’s Witness Protection, the story of a New Yorker who must hide out in Madea’s house down South while the feds put to use his key testimony against a dangerous mafia head, grosses $5.7 million this weekend, bringing it in at No. 7.

Rounding out the top 10 are Katy Perry: Part of Me at No. 8 with $3.7 million, Madagascar 3: Europe’s Most Wanted at No. 9 with $3.5 million, and Moonrise Kingdom at No. 10 with $3.4 million. Looks like animation and superheroes rule the roost this summer at the box office.