Will True Blood ever go so far as to have Bill and Eric hook up? Stephen Moyer hopes so, and has a message for those who think the lusty vampire show has become “too gay.” 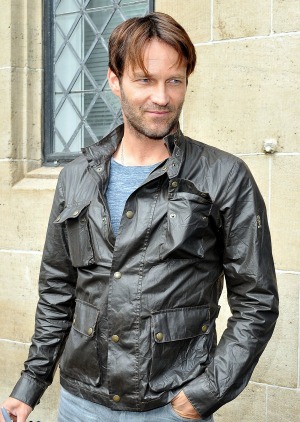 Stephen Moyer and Alexander Skarsgård are both game to film a gay True Blood sex scene — so what’s the holdup? As anxious fans imagine the possibilities, the actor talks to The Advocate about the show and life with pregnant wife Anna Paquin.

Stephen Moyer on being aware of True Blood‘s gay following:

“I feel very at home in that world, so I’m very pleased about it, but I may come in fourth behind Joe Manganiello, Alex Skarsgård, and Ryan Kwanten, if I’m really honest. I’m a little upset. Once upon a time I was doing very well in that area, but after Alex and Joe joined the show, I naturally went down in the pecking order.”

On criticism from some fans that the show has become too gay:

“Is there such a thing as too gay? We live in a very different world than we grew up in, so if people can’t embrace that aspect of our show, then that’s a shame. I certainly don’t think it’s specifically gay, but our show ticks a lot of boxes for a lot of people. We have an incredibly broad audience, one of the widest demographics in terms of sexuality and age groups, so obviously we’re doing something right.”

On if adversaries Bill and Eric will ever have angry vampire sex:

“I’ve been asking myself that question for a long time. Alex and I would absolutely embrace that. Last year, when Sookie had her fantasy about the two of them with her, we even suggested it. Of course, Bill and Eric together isn’t necessarily Sookie’s fantasy.”

On sharing a passion for philanthropy with co-star wife Anna Paquin:

“I’ve always been a flag-waving, bleeding-heart liberal. Anna and I have very similar feelings about a lot of that stuff, including LGBT causes, so we support each other in it. Being in the public eye has its benefits when you can be the face of something important and raise money for a charity that wouldn’t otherwise have had that profile.”

Check out The Advocate for even more True Blood sexiness with Stephen Moyer!

Do you think True Blood should go so far as to have Bill and Eric get it on?