This country music couple has partnered with Purina Dog Chow to raise awareness for Patriot Rovers, Inc., a group that trains dogs to change lives. Read on for their relationship tips and thoughts on puppy love. 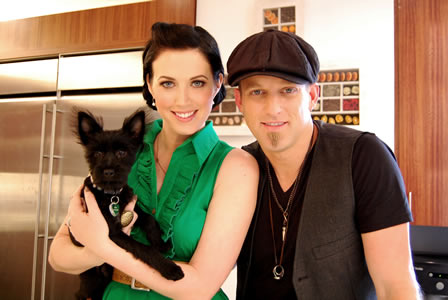 Keifer and Shawna of Thompson Square are not only one of the best rising duos in country music right now, but they’re also one of the cutest couples on the scene.

After 13 years of being together 24/7, you’d think these two would be sick of each other, but they know how to keep their love alive. In fact, they considered having children… but opted for a puppy first.

SheKnows: So, I know you guys are busy and have a new puppy, but do you have any plans for kids?

Shawna: I don’t know. I think Etta is kind of a test for a little taste of how having a baby on the road would be. The problem with us is that we don’t have one spouse that can stay on the bus while the other is on stage. It makes it a very different dynamic. We definitely need to have someone to help us out. Our manager would kill us if we threw that on him.

SheKnows: So you guys have been married for 13 years now, right? Tell me a little bit about how you met.

Shawna: We actually met back in 1996. He moved from Oklahoma and I moved from Alabama pretty much the same week and we met at this singing competition in Nashville called the National Nightlife, and we have been together pretty much ever since that night. He invited me to play a game of pool and I didn’t tell him that my dad owned the game room/pool hall and I beat him really, really bad.

Keifer: Not really bad. It was by a couple of balls.

Speller: Shawna. “He’s always misspelling everything on Facebook and Twitter. Our fans make fun of him for that.”

Singer: Shawna. “She agrees with me there,” Keifer said.

Disciplinarian: “That would be Keifer.”

Songwriter: Keifer. “Yup, me,” he confirms. “You can’t have it all! One is the singer, one is the songwriter.”

SheKnows: What has been the biggest struggle in your relationship?

Shawna: He’s totally kidding right now. The only thing I can think of is that we don’t have your typical family life. I mean we’re on a bus with 10 other guys but now we have our own bus and things are kind of back to normal. We have Etta [our dog] so it now feels like more of a home on the road.

SheKnows: So you guys work together, play together, you’re always together. How do you keep things interesting and not get totally sick of each other?

Keifer: I think that I’m an idiot. I don’t know, it’s not always interesting. It’s like any other marriage.

Shawna: I think it’s the music that keeps us interested. If we do have a little fight and we have a show that night, we go on stage and when we start singing, that “thing” is over. It’s like our therapy, I think. We just like to have fun whether it’s the Xbox, playing with Etta or taking a walk. We have fun with each other.

SheKnows: What is the best relationship advice you have ever received?

Keifer: Know when to be a man and don’t go to bed with anyone else.

SheKnows: That is very sound advice right there. What are three tips for a strong marriage?

Keifer: Well, I just gave you two. Listen to each other, communicate with each other, and forgive each other. Good advice for everyone to learn.

SheKnows: Is the song “Kiss Me or Not” reflective on your relationship?

Read real pet stories and learn more about the online community Thompson Square is launching with Purina Dog Chow here. “We wanted to give families the opportunity to capture and share these special, impactful moments.”

Get love advice from other celebrities