Michael Clarke Duncan has been hospitalized after suffering cardiac arrest in the middle of the night. Along with thanking paramedics for coming to his rescue, the actor owes one very special “thank you” to Omarosa. 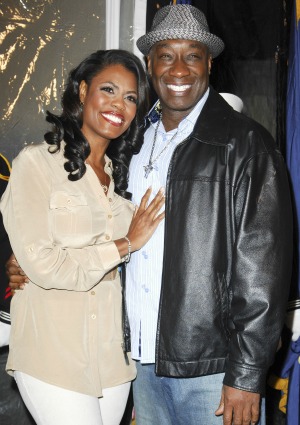 Michael Clarke Duncan’s life nearly ended in the wee hours of Friday morning. The Green Mile actor was found by girlfriend Omarosa in a state of cardiac arrest — thankfully, she knew what to do.

TMZ reports Omarosa found Duncan at 2:00 am Friday morning. The reality star, made famous through her two seasons appearing on The Apprentice, jumped into action by calling 911 and starting CPR.

The 54-year-old, who started dating Omarosa in 2010 after the pair met in the produce department of a Whole Foods grocery story, was transported to a nearby hospital where he was immediately admitted to the ICU.

Sources report that Duncan’s heart rate is now stable. Doctors are performing tests to figure out why the actor’s heart stopped in the first place while his 38-year-old girlfriend stays close by his side.

The once 315-pound actor has reportedly trimmed down his 6-foot-5-inch frame in recent years through exercise and becoming a vegetarian.

More on CPR from SheKnows >>

A publicist for Duncan spoke about his health briefly midday Friday, telling E! News, “According to doctors, Michael Clarke Duncan suffered a myocardial infarction early this morning. He is now stable and we look forward to his full recovery.”

Rushing to send well-wishes out to the actor, many celebrities have taken to Twitter. “i hope my brother Michael Clarke Duncan will be ok,” Russell Simmons tweeted, while actor and writer Erik Stolhanske wrote, “Best wishes for a speedy and full recovery to the Champ, Michael Clarke Duncan. Get well my friend.”

Best wishes from us as well go out to Michael Clarke Duncan and Omarosa!