This Sunday, the $155 million golf course Donald Trump built in what he characterizes as “an unspoiled and dramatic seaside landscape” is set to open to the public. Scots living near the course used to think the same thing about their surroundings — that is, until Trump and Co. literally built a wall around them. 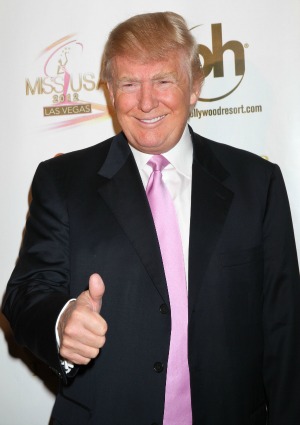 Scotsman David Milne used to see a once-spectacular view of the dunes and sea along Scotland’s eastern coast. No more.

The Guardian, by way of Deadspin, reports Donald Trump offered to buy Milne out of his home, which neighbors the Trump International Golf Links course.

When that failed, Trump did what any self-respecting Dr. Evil-type does: He built a row of tall spruce trees around Milne’s house, blocking what was once a brilliant view.

And, to add insult to injury, Trump’s exchange to an aide about Milne’s house was caught on video for the TV program Donald Trump’s Fabulous World of Golf: “”It’s our property, we can do what we want. We are trying to build the greatest course in the world. This house is ugly.”

Munro, too, used to have an awesome view of the Aberdeenshire coastline. Now, she has a view of a 26-foot-tall sand berm.

When Munro, like Milne, refused to take Trump’s money in exchange for the land where her house sits, The Donald built what is essentially a wall of sand around her house.

She also gets to experience the bright lights of Trump’s security goons 24-7.

“I used to be able to see all the way to the other side of Aberdeen but now I just look into that mound of sand,” Munro told The Guardian. “It is the same all the way round.”

And these stories, while sad, say nothing about the development’s broader impact on the iconic dunes, considered to be among the U.K’s most valuable and mobile sand dune systems.

Like Trump, it seems the Scottish government may have seen only $$$ signs.

Agence France-Presse reports around 160 jobs have been added to the local economy in management, catering and course maintenance posts.

In addition, more development has been slated — including a hotel and, ironically, more houses on the site.

What’s more, this appears to be a favored tactic for His Royal Donaldness to use upon the lowly, neighboring paupers; a similar scenario played out in Rancho Palos Verdes, California in 2008.