Emily Giffin is one of women’s fiction’s most celebrated authors. She hit the ground running with Something Borrowed, introducing us to the timeless characters of Rachel and Darcy. It was even turned into a movie starring Ginnifer Goodwin and Kate Hudson. Now Giffin is back with her sixth novel, Where We Belong. 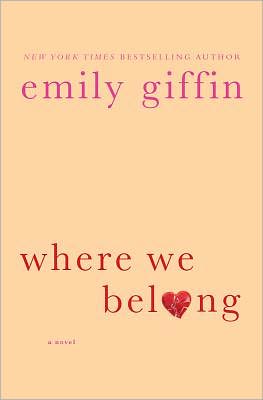 Emily Giffin writes quality, thought-provoking women’s fiction. Her novels are always interesting, with sympathetic, realistic characters and heart-wrenching situations that make the reader feel emotionally invested in the storyline. Though she’s written six books, the quality of her novels has only increased with time, and nowhere is that more evident than with her latest book, Where We Belong.

Marian Caldwell has a good life. She lives in New York City, a place that she loves, and she is the producer of a television show, her baby that she developed from the ground up. She’s dating a wonderful man (who also happens to be her boss) and though he’s a bit commitment phobic, Marian knows he truly cares about her. Marian doesn’t think much about the past, even though for 18 years she’s been hiding a secret from everyone she knows. She doesn’t think that it can ever come back to haunt her… that is, until Kirby Rose shows up at her front door.

Kirby has always known she’s adopted, but she doesn’t feel like she fits in with her family. She’s screaming to get out of their overprotective grasp. So when she turns 18, she decides to find her birth mother once and for all, to see where she came from. Telling her parents she’s going out of town with a friend, Kirby gets on a bus headed for New York and doesn’t look back.

Now that Marian and Kirby have met, Kirby has some hard questions for Marian. Marian isn’t sure what to do or how to act, and she knows that Kirby will eventually ask about her birth father. How will Marian tell her that her birth father doesn’t even know she exists, that she chose to keep the news that she was pregnant to herself all those years ago? As Marian grapples with the decisions she made as a teenager, and realizes while some were wise, others were immature, she must now face the consequences of the past. Because Kirby isn’t going anywhere, and against all odds, Marian realizes that she likes the person her daughter has become and wants to be in her life, in whatever capacity she can.

44 mins ago
by Reshma Gopaldas