Sara Evans is much more than a country music superstar. She’s also happily remarried, a baseball mom, and a calorie counter. Here, Sara opens up about coping with difficulty, her secret to staying skinny, and her last parental freak-out… 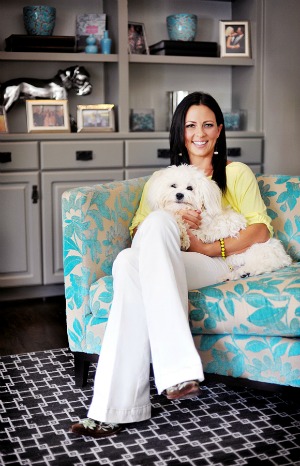 Kat: During your six-year break, you wrote a couple of books. Was being a novelist on your bucket list?

Sara: Never. I was approached by Thomas Nelson to do this, he was like what would you think about writing a novel from a Christian, conservative, spiritual perspective? And I was like, “There is no way I can do that. I wouldn’t know how.” They said, “ Well, obviously we’d put you with a co-writer but the stories would be yours.” So I thought why not, and the more I got into it, the more obsessive and addicted I became.

Kat: Those of us who have gone through a divorce can only imagine what it’s like to have to go through all that pain and agony in front of millions of people. You got through it and now you have an amazing new life with your husband, Jay Barker. What words of encouragement can you offer folks who are reading this and in the middle of a divorce?

Sara: That’s a good question. I hate it when anybody has to go through that. It is a really painful thing and I would say to anyone in the middle of anything like that to just stay calm, take things one day at a time, and not look too far ahead. Eventually it’s going to be OK. Surround yourself with people who love you.

Kat: It can be overwhelming.

Sara: It can consume you. Try to stay in the moment and try to not overreact.

Kat: You and Jay have seven kids between you. What are their ages?

Kat: Oh my word. So how does that work? Do you start Christmas shopping in February?

Sara: (laughs) My personality is really low-key, and so is Jay’s. So we don’t get uptight with anything. And I’m not going to lie, we have a lady that comes every single day to help me with laundry, grocery shopping, stuff like that. We just try to stay calm. I’m not one of those uptight, overwhelmed kind of girls. As far as Christmas, in November we’ll probably pick a theme, like last year it was bikes. Santa Claus put seven bikes in our living room. Right now, I’m packing for the beach. Jay and I are taking the kids to the beach for nine days.

Kat: Does everyone get along OK?

Sara: They do! They get along great. Jay’s kids fight with each other and my kids fight with each other, but there isn’t a lot of crossover. We’re pretty strict parents — we don’t let them fight, we don’t let them talk back to us. We run as tight of a ship as we can. The dynamics of a divorce and blended families are there. And I come from divorce — my parents divorced when I was 12, so I totally understand what they are going through and what they feel and their struggles, so I try to compensate for those constantly.

Kat: OK, so you’re this country superstar who’s come out of a divorce kicking ass. Make the rest of us feel better and tell us what your last parental freak-out was.

Sara: (laughs) I would say that my last parental freak-out was a few weeks ago when I went to Orlando for my son’s baseball tournament and he’s a great baseball player. He’s 12, he’ll turn 13 in August. He and I are extremely close and he’s a great kid, but he’s also a perfectionist. He feels like he can’t miss a ball, strike out, and so we have struggled with him showing emotion on the ball field. He missed a crazy wild pitch, and he’ll like make a scene and show all this emotion and it makes me fur-i-ous. It makes him look like a jerk, it makes me look like a bad parent, it makes the other team happy. Anyway showing emotion on the ball field is something he really gets in trouble for. So I think I freaked out in Orlando after one of the games, and told him if he doesn’t stop he’s never going to play again, I was going to take every single thing in his life away.…

Kat: Life as he knows it will be over!

Sara: Yes. Normally I’m not a yeller, I’m always in a good mood, I’m low-key, I really am. My kids have to be really obedient and respectful and say, “Yes ma’am” and “No sir.” But I also have a very loving personality, so they know as long as they are doing the right thing, it’s a very easy life. But that showing emotion on the baseball field drives me crazy. It really does. It just makes him look ridiculous. And for some reason I can’t get him to stop.

Kat: I’m laughing with you, not at you. Kids know better than anyone what presses our buttons, you know what I mean?

Sara: Yes! Jay’s a professional athlete, so he never lets me say anything during the game to Avery. Jay’s like, “The mom should just not speak when her son is playing ball. Don’t say a word.” So when he’s showing emotion on the baseball field, I’ll be like, “Avery!” trying to get him to stop and Jay is like, “Don’t say anything until after the game.”

Kat: Jay’s sitting there giving you an elbow in the ribs when you’re trying to say something to Avery…

Sara: Oh, absolutely. Jay’s the boss. He’s like, “Stop it!” I guess only a man knows what a boy is feeling.

Kat: That’s true! As moms, we’re busy trying to mold a kid, so we’re not too preoccupied with how we might be potentially emasculating them.

Sara: Exactly! I’m very, very, very big on not emasculating your husband or your son.

Kat: I went on Facebook and asked if anyone wanted me to ask you something and my cousin wanted me to give you his phone number, but my friend Kim said, “Ask her how she stays so skinny!”

Sara: Spending time with my dog — he’s a calorie burner. But I’m a tennis player — it’s a sport that I picked up about four years ago. I’ve always been an athlete — I play all kinds of sports. I stay skinny by playing sports, mostly tennis, and I count my calories. I’m a firm believer in calorie counting. I don’t think any food is off limits, but my thing is like, “Stop eating so much!” When I cut back on eating, it works.

Kat: So can I ask you how many calories you try to stick to a day?

Sara: Yeah, I try to do about 1,200 calories a day. If I’m injured or not able to exercise because I’m on the road, I might cut that back a little bit.

Kat: You’ve partnered with The Nutro Company and their Room to Run Dog Park Appreciation Project. Want to tell us a bit about that?

Sara: When I was approached to work with this program, I was immediately excited because we have a dog that is the love of our lives , he’s very important to us, he’s like our eighth child. One of my favorite things to do with him is to take him to the dog park to run. So I thought this was just such a great thing they are doing. You can go online and register to receive a grant to make your local dog park better with improvements. They are giving 30 grants to improve dog parks — it’s a really cool project.

Kat: Anything else we should know about?

Sara: Well, I have a new single coming out July 24th, it’s the third single from the album Stronger and it’s called “Anywhere.” And it’s exciting because my brother wrote it.

Kat: How cool! And you’re headed to a beach for nine days! That’s going to feel good. Have a great vacation.