The much anticipated Wizard of Oz prequel has eight months until its release, but director Sam Raimi debuted the first trailer today at Comic-Con in San Diego.

Comic-Con is becoming one of the premier places to show the first glimpse of your newest movie, and this year is no different.

One such film that showed up today is the 2013 release Oz: The Great and Powerful.

Director Sam Raimi also made an appearance at the festival. The Spider-Man director is behind the Wizard of Oz prequel starring James Franco.

Similar to the original 1939 film, Franco is a Kansas citizen who is sucked up through a tornado and transported to the Land of Oz. This takes place before the story in the Wizard of Oz, but is not a story imagined by Raimi.

“The prequel is based on characters created by L. Frank Baum in his series of 14 books — the first of which was published in 1900,” said the Hollywood Reporter. “Franco apparently has read them all.” 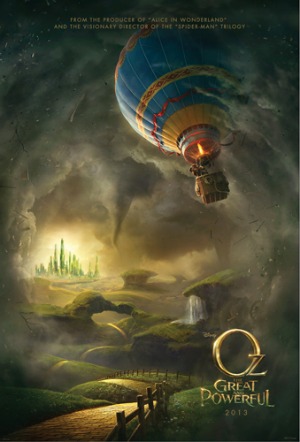 Three witches are also featured in the trailer. Mila Kunis plays Theodora, Rachel Weisz plays Evanora and Michelle Williams plays Glinda. Franco’s character travels through Oz trying to figure out who is good and who is not.

“When Oscar Diggs (James Franco), a small-time circus magician with dubious ethics, is hurled away from dusty Kansas to the vibrant Land of Oz, he thinks he’s hit the jackpot — fame and fortune are his for the taking,” said a rep for Disney.

While residents of Oz are impressed by their visitor, the three witches are not so sure he is everything he seems to be.

“Reluctantly drawn into the epic problems facing the Land of Oz and its inhabitants,” said Disney, “Oscar must find out who is good and who is evil before it is too late.”