At an emotional press conference that is one of the last for the gang of Twilight, Kellan Lutz, Peter Facinelli, Elizabeth Reaser and others from the Cullen clan bid an emotional goodbye. 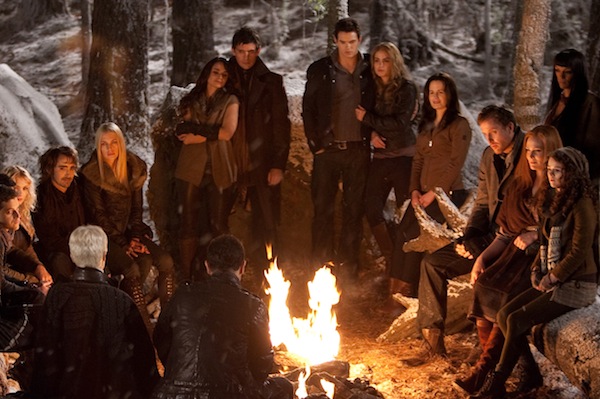 With the final installment of The Twilight Saga: Breaking Dawn Part II on the horizon, the cast got together at Comic-Con Thursday to greet reporters for a final time about the emotional end to the worldwide phenomenon started just four years ago.

As the cast reminisced about the past Twilight movies, it was clear that with the opening of Breaking Dawn Part II in November, there won’t be any more of these kinds of moments for the cast that has come together as a family.

Lionsgate is hungry for more Twilight >>

“We had no idea what we were getting into,” says Elizabeth Reaser, who some regarded as the mother figure to this group — and why not, she plays the matriarch of the Cullen family in the films. “We just thought we were getting into this little vampire movie made in Portland.”

Reaser reminded her cast-mates about how on the first film, the men and women were segregated into different hotels. They were separated, that is, until this wild bunch found out how to get to each other. Ow! Who snuck out? Was it Facinelli? No one would tell. But we’re sure the jokester of the group had something to do with the “hijinks” that quickly ensued as the cast called them.

The wild times of the first Twilight movie clearly set the precedent. In Breaking Dawn Part II, there appears to be a moment when everyone suddenly broke into dance. Dance routines on a Twilight set, or in the film for that matter? Anything is possible.

You’ll have to see it to believe it, but apparently this “dance off” happens during the film’s finale. How else are vampires going to fight? “We were learning this dance on the sly,” says Reaser about training how to shake it vampire style.

Joking, Kellan Lutz, who plays Emmet Cullen in the films, says everyone competed. He jokes that they had a running gag. “Whoever wins the dance off gets the baby Renesmee,” he says. Do Edward and Bella know about that? Probably not.

Fans will definitely want to see the finale of this epic saga. The Cullen family shakes it for the final installment of The Twilight Saga: Breaking Dawn Part II that opens in theaters Nov. 16 despite the emotional goodbye to the series that brought them all together.