Kristen Stewart revealed at Comic-Con Thursday that her sex scene with real-life boyfriend Robert Pattinson in the final installment of The Twilight Saga: Breaking Dawn Part II ended up getting cut because it was just too hot.

“In the second one, we just wanted it to be animal. We’re not human anymore,” says Kristen Stewart who plays Bella the human-turned-vampire in the final installment of The Twilight Saga: Breaking Dawn Part II. 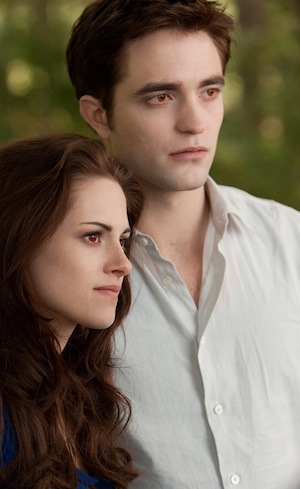 She’s talking about the sex scene she did with her real-life boyfriend Robert Pattinson who plays Edward, her vampire husband. Stewart says they set out to make this scene a lot hotter than in the first part of Breaking Dawn. We’re already hooked! When she asked how she went about doing that? The actress answers, “We tried. And they told us that it was rated R.” Muy caliente!

So, why was the scene cut down, and the hotness taken out, so to speak? “The ratings, man, it’s a tricky thing…” Stewart says while blushing. She’s sitting a very definite seat away from her boyfriend at a press conference for the film at Comic-Con in San Diego. And just how is this sex scene different from the one in Breaking Dawn Part I where Bella loses her virginity?

“We’re supposed to have mind-boggling, other-worldly sex in Breaking Dawn I, and we really — this is weird — tried to keep the first one sweet. It was about discovery,” she says, obviously uncomfortable with the topic of filming sex scenes. Who wouldn’t be, Bella?

The conversation quickly turned to Stewart’s experience as a vampire for the first time.

What did Stewart have to say about that? She was more than excited to jump into her character’s new skin. “You’re like, wow, I’m a sports car, let’s break her in,” she says with great enthusiasm on the panel that included Pattinson and other castmates Taylor Lautner and newcomer Mackenzie Foy, who plays Renesmee, the daughter of Bella and Edward. They were also joined by novelist Stephenie Meyer whose books are to thank for this growing phenomenon.

The talk of sex and laughter, remembering how each other first met, quickly became emotional when the actors started reminiscing about this being the end of Twilight.

It was bittersweet to think that after nearly half a decade, audiences have grown up with this cast and watched them go from young actors into global superstars. Even Foy made one of her first public statements about being a part of the film. “It was exactly perfect, every moment was something I will cherish,” the eleven-year-old actress says.

This makes Stewart put her head in her hands, the emotion of Twilight coming to an end too much to take for even this tough actress. “I do really enjoy living in this world. I put everything I have into it. Even though it’s kind of a bummer to walk away, I look back on it so fondly. It’s something I’ll always have,” Stewart says. Everyone agrees, and the room pauses for a moment as the final press conference for the Twilight series came to an end.