Not since The Nanny Diaries have we gotten to peek behind the curtain on wealthy moms and their nannies. Tonight changes all that with the premiere of Beverly Hills Nannies. Here we visit with one of the moms Marika Tsircou about breast-feeding, attachment parenting and her outrageous parental demand… 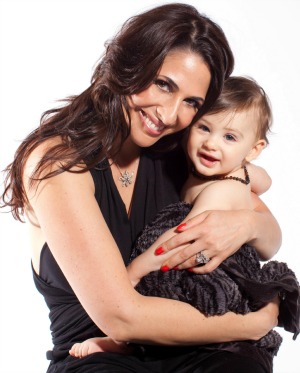 Kat:
You’ve spent quite a bit of time in Sun Valley, Idaho. Are you more a mountains-and-rivers or sea-and-sand girl?

Marika: I think it’s a little of both. Growing up in Beverly Hills and L.A. I love, love, love the city, but it’s always important to me to get out of town. I love skiing — I’ve been skiing since I was about three. But there is nothing like a beach vacation.

Kat: In your blog, you mention you would like for your children to also have childhood memories of Sun Valley. So how many children would you like to have?

Marika: I have one now, Xander, and he’s turning one on Aug.18 which blows my mind. I definitely want two, maybe three kids.

Kat: Now that he’s almost one, is he doing any cool tricks — like walking?

Marika: He started crawling at five months. Friends call him super baby. He’s not walking yet, but he does stand. As soon as he realizes he’s standing, he kind of plops down. I’m not in any hurry for him to walk.

Kat: Yeah, once they walk it’s all over.

Kat: Let’s get into some juicy stuff about nannies. How many nannies do you have?

Marika: I have one nanny.

Kat: I’m going to ask the question all women in America are going to ask, so forgive me. Why does a stay-at-home mom need a nanny?

Marika: You know, I don’t have a full-time nanny. My husband and I do go out at night sometimes, but I’ve only not put Xander to bed myself twice. I literally make plans around his bedtime and turn down invitations if they are before 8:00 p.m. It’s really important to me that I put him to bed. So the nanny comes over once I put Xander to sleep. And I’m an artist. If I’m downstairs painting I need someone to watch him. So everyone needs a little help here and there. It’s on an as-needed basis.

Kat: You actually have a “manny.” Is there a specific reason you chose a guy-nanny?

Marika: The show kind of put us together. They thought our personalities would go well together and Justin is just a ton of fun. Justin is also a “ladysitter,” so he’s all about helping a new mom out.

Kat: You are a self-described breast-feeding expert and advocate. So what did you think about the cover of Time Magazine that featured a young mother breastfeeding her 3-year-old son?

Marika: I thought it was fantastic. The article itself and the cover was sensationalized — they made the baby look 6 years old. The way that they approached it seemed a bit backwards. But it got out there that extended breast-feeding is becoming more popular and I think absolutely, you should. I’m not setting a date on weaning my baby.

Kat: How do you feel about attachment parenting which advocates for extended breast-feeding, co-sleeping and schooling as mandated by the child?

Marika: We definitely did Dr. Sears’ method for a while. We co-slept for six months, which I think is really important. The first six months your baby needs to nurse and be near you all night long. I still baby-wear, which is still so amazing to me because some doctors told me I wouldn’t be able to have a baby because of my neck — that I’d have to have a surrogate. I think attachment parenting is really good in some ways. Every mother has to take what works and leave the rest.

Kat: Did you see The Nanny Diaries?

Kat: The mothers in that movie were portrayed in a pretty negative way by the nannies. Did you or your husband have any concerns about you doing the show?

Marika: You always have concerns going on a reality show about how you’ll be portrayed because it is all about the editing. At the end of the day, the reason I decided to do it is because it is on ABC Family. If it was on one of those more high drama channels, I probably would not have done it. I’m really comfortable with who I am and what kind of mother I am.

Kat: What do you think your most outrageous parental demand has been?

Marika: I don’t think it’s that outrageous to request a foot-rub. I gained 65 pounds when I was pregnant and your feet still hurt for months! What mother wouldn’t want a foot-rub while they’re breast-feeding? I mean, come on!

Kat: See, if you had a girl nanny who had given birth, she would have done it. Justin can’t empathize.

Marika: Absolutely. I didn’t think it was that outrageous. He was like, “Girl, I’m not going to do that.”

Kat: Best of luck with your premiere tonight!

Marika: Thanks, I’ll be live-tweeting during the show tonight, so watch for that!