Wednesday, sports brand Puma launched its Project Pink initiative, featuring none other than Disney alumnus Ashley Tisdale, who shares her personal motivation for getting involved with the campaign, and how you can join, too. 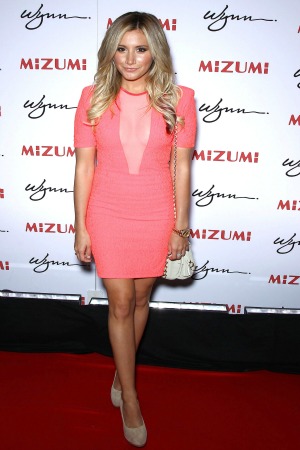 As part of the Project Pink campaign, Puma is asking: “Who do you wear pink for?”

“I wear my pink for my grandmother, who recently battled breast cancer,” said Ashley Tisdale, this year’s Project Pink ambassador.

The High School Musical star is encouraging others to share their reasons for “wearing pink,” and to join in the fight.

Puma’s given us a number of ways to get involved with the campaign, now in its third year.

First, all of the proceeds from its Project Pink Collection, which includes shorts and T-shirts, will go to the fight.

On Twitter? Every time you tweet using the hashtag #projectpink, Puma will throw another dollar into the pot.

From today until September 21, you can nominate a worthy charity, large or small, as long as it’s connected to the cause in some way.

You can then vote for your charity of choice, starting on September 24.

The charity with the most votes will take home all the funds raised through Project Pink this year, according to Puma… that’s to the tune of $120,000.

Puma reports past nominees have ranged from support groups to research organizations.

Regardless, they’re trying to make a difference in the lives of those like Tisdale’s grandmom.

“I’m happy to say that she’s now in remission, but there are too many women out there who are still fighting,” Tisdale said, during the Project Pink kickoff.

Who do you wear pink for?