Kris Jenner is trying to sell pictures of daughter Kourtney Kardashian’s new baby, Penelope Scotland Disick. The problem? No one wants to write a check to get them! 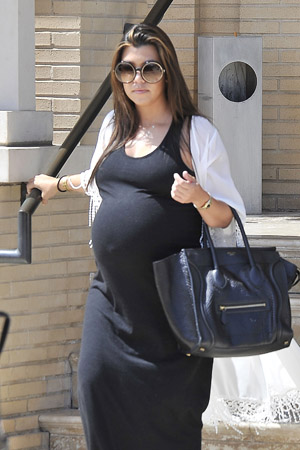 Is the booming celebrity baby photo business bust? Yes, according to some magazine editors. That’s bad news for Kourtney Kardashian — she’s not likely to attract much green for photos of newborn baby Penelope Scotland Disick.

“She will be lucky if she gets $20,000 to $30,000 for the pictures,” a gossip mag editor told The Huffington Post’s Rob Shuter. “The Kardashian craze has been over for some time now. Now a picture of Tom and Katie is worth more.”

We’re not sure if the craze is actually over — the reality family just signed a $40 million deal with E! for more shows, but the interest in their every move is waning a bit.

Kris Jenner already has her claws in Penelope Scotland Disick >>

The real issue: Celebrity baby covers just don’t move on newsstands like they used to, mostly because the same photos and interviews are available online almost immediately. Case in point? Jessica Simpson received a reported $800,000 for the first photos of daughter Maxwell Drew Johnson, but the cover story didn’t bring in the bucks.

This probably isn’t news for Kardashian momager Kris Jenner: She had a hard time selling off Kourtney’s baby shower photos, eventually selling them to US Weekly for less than she wanted.

“It’s been a long time since paying to secure exclusive images of a celebrity baby guaranteed huge sales,” another editor said. “Kourtney’s second child isn’t such a big deal. If it were Kim’s baby, it might be different, but with the exception of hardcore fans no one is waiting to see what Penelope looks like.”

We know that Kris is likely trying to cajole Kim and beau Kanye West into having a kid — gotta keep that cash coming in! Still, it’s pretty depressing that Kourtney can “only” attract $20-30K for pictures — that’s more than millions of people make in a year! We’ll gladly take that much for the first photos of our kids, thanks.