Thousands of Twilight fans descended on San Diego earlier this week to get a sneak peek of The Twilight Saga: Breaking Dawn — Part 2. However, one fan was tragically killed before she got that chance. 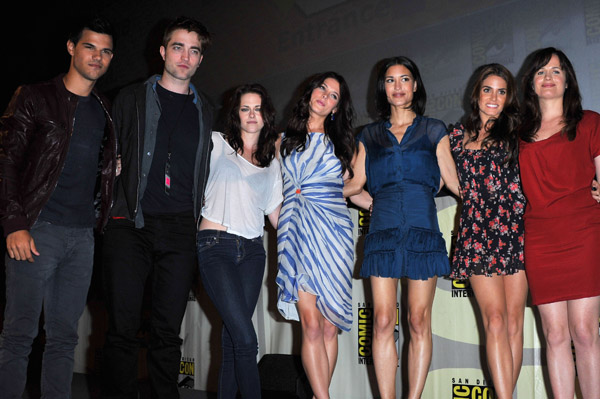 Twilight fans are die hard — they have the name TwiHards for a reason — but no one means that in a literal sense. Sadly, one fan did end up dying over her Twilight fandom: A 53-year-old fan, identified only as Gisela G., was struck and killed by a vehicle as she rushed to get a spot in line for the Twilight panel in Hall H at Comic-Con.

“A 53-year-old white female was killed in a pedestrian vs. vehicle fatality collision at the intersection 5th Ave. and Harbor Drive,” the San Diego police department said in a statement. “The preliminary investigation reveals that the woman was running across Harbor Drive, where she nearly ran into the path of a westbound vehicle. She tried to stop but tripped and fell into the car. She received massive head trauma.”

“I’m so sorry to hear the… news about Gisella[sic] G. My thoughts and prayers are with her family and friends,” Ashley Greene tweeted.

“This is horrible. So sad. I’m speechless,” Reed wrote.

“RIPTwihardG All our love and respect, and all our prayers,” Rathbone added.

Comic-Con and movie studio execs also expressed their sadness, with Summit/Lionsgate promising to honor Gisela during the panel on Thursday afternoon.

“Lionsgate, Summit and the entire Twilight community are saddened by the death of a Comic-Con fan today due to a traffic accident during the hours leading up to this year’s convention in San Diego,” the studio wrote in a statement. “Our thoughts and condolences go out to the victim’s family and friends. She will be respectfully remembered this Thursday in Hall H.”