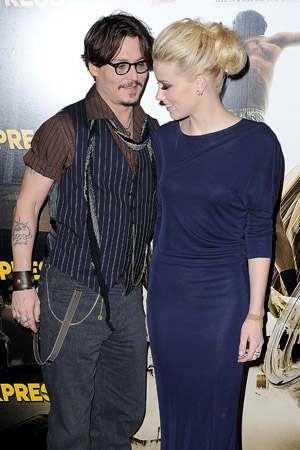 Vanessa Paradis is reportedly none too pleased that her former love, Johnny Depp, is dating his blonde Rum Diary co-star Amber Heard. The French pop singer, 39, blames Heard for the breakup, calling her a “man-stealing, two-bit nobody and has vowed to not let her anywhere near their children Lily-Rose [13] and Jack [10],” a source told the U.K. tabloid Now.

Isn’t that how it works? Women end up blaming “the other woman” instead of the man. Hey Vanessa: It takes two to tango, you know. Plus, sources told US Weekly that Paradis and Depp had fiery rows in the final weeks of their relationship.

“Nothing Johnny did was ever good enough for Vanessa. When he was working, she wasn’t happy. And when he wasn’t working, he was called a slob for not doing enough for the kids and her family,” the source said.

“They’d have blazing fights. Vanessa would take her frustrations out on him,” the source continued, adding that it influenced Depp to “drink heavily.” Of course, no one in the love triangle is talking about anything, so we’re left to speculate. One thing we do know for sure: Heard definitely likes Depp.

“I mean who isn’t a fan of Johnny’s? He’s been a cultural icon and a talented actor since I can remember,” Heard told SheKnows while promoting Rum Diary.

“I have such a strange job,” she continued. “It puts me in the most interesting circumstances and I certainly wasn’t complaining about this one. I’m in the middle of an Aaron Eckhart/Johnny Depp sandwich. I was just fine.”

Should Vanessa Paradis be upset with Amber Heard? Or, should her anger be directed toward her ex?