Who would have thought the fantastical action-adventure series would inspire the bigwigs in the U.S. military? It turns out that the “fashion” worn by Lucy Lawless on Xena: Warrior Princess may actually save lives. 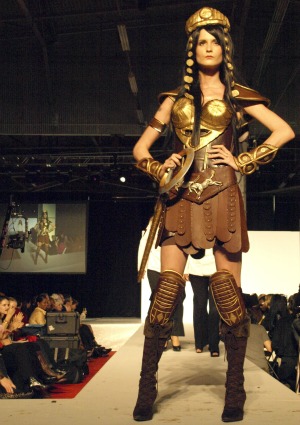 Lucy Lawless hasn’t donned her kick-butt action gear as Xena for more than a decade. But the series that had its heyday in the mid-’90s is living on… in the U.S. military?

Turns out, defense officials are taking inspiration from the show to engineer a new style of body armor for female troops.

The Christian Science Monitor reports the body armor would be designed to contour a woman’s body better. A better fit, in turn, means better protection — what could be the difference between life and death on the battlefield.

Apparently, women of the storied 101st Airborne Division came to officials with concerns about the gear they were wearing.

Lt. Col. Frank Lozano puts it like this: “It rubbed on the hips, and the vests were too long in the front, so that when you had female soldiers climbing stairs or climbing up a hill or a tree, or sitting for a long time in a vehicle, that would create pressure points that in some instances could impact blood flow and cause some discomfort.”

Of course, it’s one thing to be comfortable and another thing when the body armor doesn’t fit a woman’s curves right to give optimal protection.

By way of Christian Science Monitor, a U.S. Army study notes that current body armor for women didn’t take into account differences between males and females when it comes to torso length — or shoulder width.

Imagine being on battlefield, when seconds count, and you’re having a tough time properly aiming your weapon at your enemy or rushing in and out of a vehicle because of your garb. That’s a problem.

Most importantly, CSM goes on to quote another official with the office of soldier protection and individual equipment, who said it’s critical to “spread out the energy” when a bullet hits the body.

The desired Xena-style plates would also be lighter than the hard-armor plates made more for men.

The combat gear being tested might even feature Xena-style “bra-shaped darting.”