Channing Tatum is putting his clothes back on. The red-hot actor is moving from the world of stripping to the daredevil culture. Tatum is in talks to play the late Evel Knievel in an upcoming biopic. 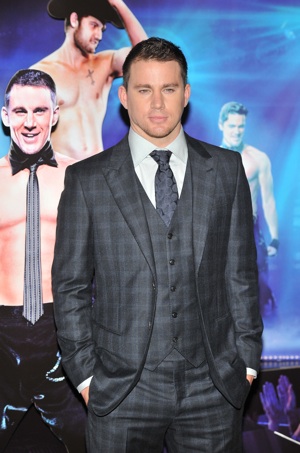 Channing Tatum is on a winning streak. After headlining the semi-biographical stripper flick Magic Mike, he’s tackling someone else’s story. This time, he’ll star and produce a film based on the life of daredevil Evel Knievel.

The man in the thong: A real Magic Mike >>

According to The Hollywood Reporter, Tatum is in talks to star in a Knievel biopic for Columbia Pictures. The film will be written by his producing partner, Reid Carolin, and will highlight the stuntman’s jaw-dropping career.

Evel Knievel gained popularity in the late ’60s and early ’70s for his nationally televised motorcycle jumps. He was just as famous for his style as he was for his stunts. He frequently wore a spangly outfit covered in stars and stripes. He also boasted about the 433 broken bones he received over the course of his career.

Tatum isn’t the first actor to fill Knievel’s death-defying shoes. In 1971, George Hamilton also starred in a self-titled film based on his life. Then six years later, Knievel himself headed to the big screen in Viva Knievel!

In the ’90s and 2000s, Knievel struggled with declining health. He’d contracted hepatitis C from a blood transfusion and had to receive a liver transplant. After that scare, he was diagnosed with diabetes and idiopathic pulmonary fibrosis. In 2007, at the age of 69, Knievel died from his medical complications.

Tatum and Columbia’s biopic will be based on the Stuart Barker book, Life of Evel.

Does Tatum have what it takes to be Knievel?