Out this month in paperback from the editors of New York magazine is a fascinating collection of 56 essays by well-known personalities from almost all walks of life. Read about their first impressions of a city they now know well. 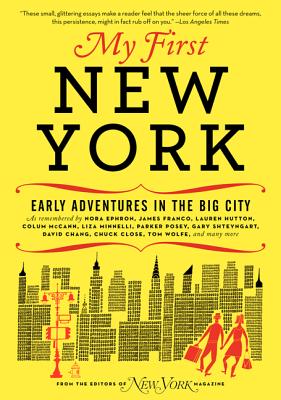 For almost 200 years, New York City has been a hub of excitement and a principal stop or destination for those on their way to fame. Originally collected for a magazine feature by the editors of New York magazine, the personal stories in My First New York were written by 56 well-know individuals and span 75 years of the city’s history.

This collection is one that you’ll want to dip into a little at a time. The essays are arranged chronologically from 1933 to 2006, based on the year the writer first saw the city. Throughout the decades, these initial impressions were colored by contemporary trends, the economy and each individual’s particular circumstances.

Some, like Dan Rather in 1956, stayed only a couple of days that first time. Others, like Mike Myers in 1988, came to New York with a job offer on the table and settled in for the long haul.

Ira Glass moved to New York to be with a girlfriend in 1984 and never did learn to feel comfortable walking (or running) past the drug dealers and prostitutes on his way to and from the subway station. When Liz Smith arrived in 1949 wanting to be a writer, the city was beginning to flourish after the war. She was lucky enough to be able to go to Broadway plays for just $2.50 a show.

The first day David Rakoff was in the city, his mother was robbed, giving him a rude awakening to the very real dangers of New York City in the early1980s. For Judy Collins, life in the Village in 1963 was filled with art and music. She saw Bob Dylan’s concert at Town Hall and hung around with the likes of Lily Tomlin and Leonard Cohen.

Some of the most fascinating stories in My First New York are the memories of immigrants. Gary Shteyngart was still quite young, but the drastic change from Leningrad to New York in 1979 seemed like a scene from a science fiction movie. But even his culture shock pales in comparison to that of Jonas Mekas, who went from fearing for his life, to a refugee camp and then to the bright and beautiful city of New York in a matter of weeks at the end of World War II.

In dozens of short essays (the shortest one coming from Yogi Berra) written by notable journalists, actors, artists, politicians, models, athletes and more, My First New York records the life and times of three-quarters of a century of New York City. The Big Apple is revealed in all its glory and excitement, its crime and filth, from the dark corners of scary neighborhoods to the hippest bars and restaurants.