Usher remains at his ex-wife’s side as her son, Kyle Glover, continues to fight for his life after a jet ski accident left him brain dead. Find out who caused the horrific accident — and how Foster is coping. 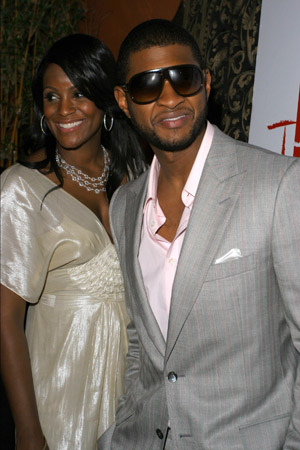 Kyle Glover is still fighting for his life in an Atlanta, Georgia hospital just days after an accident on the city’s Lake Lanier left him brain dead. However, mom Tameka Foster isn’t giving up on her son yet.

“Kyle, You are strong.. You’ll be saved I know it. I love you my baby. I need all #Prayers for my son! Thanks (sic) you everybody!” she wrote on the social media site, according to Radar.

Usher is reportedly still at his ex-wife’s side, despite their contentious relationship. Sources say that the singer is absolutely heartbroken over Kyle’s condition — the two were close both during and after the marriage.

“He grew close to Kyle and, of course, that has nothing to do with the situation with Tameka,” the source told US Weekly. “He loved Kyle. This is a terrible, awful tragedy. Usher is torn up.”

“Tameka and Usher don’t get along, but in this circumstance Usher is coming to her side,” the source continued. “Usher practically raised Kyle as his own. He’s known him for seven years. It is so sad what happened.”

As if that wasn’t enough, the person responsible for the accident — Jeffrey Hubbard, according to MTV News — is a family friend. Kyle and a female friend were riding an inner tube when Hubbard allegedly struck them, according to a report from the Georgia Department of National Resources obtained by MTV.

The girl received a broken arm in the accident, but Kyle hasn’t registered brain activity since.

“Basically, a pontoon was pulling two juveniles on an inner tube, and the watercraft ran over the top of them,” Sgt. Mike Burgamy of the Georgia Department of Natural Resources told the New York Daily News.

Officials are still deciding whether or not to charge Hubbard in the accident, according to The Hollywood Reporter.

“One minute the jet ski was running around, the next he ran over the top of them — it happened that quickly,” Burgamy added. “It appears the watercraft did strike both juveniles, with the male taking the brunt of the force.”

Such a sad, horrific accident.