It was all smiles as Savannah Guthrie started the week in her new role as Today co-host alongside Matt Lauer. But Ann Curry apparently didn’t take the-behind-the-scenes drama with her when she was ousted from the plum co-host gig. 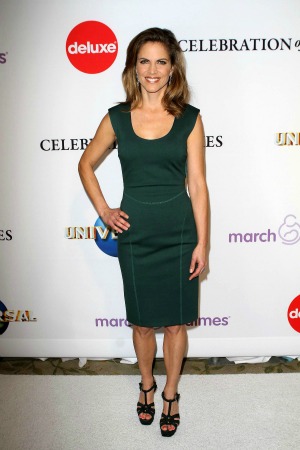 A name we didn’t hear a lot during the whole Ann Curry debacle was “Natalie Morales.”

She took over as the show’s news anchor when Curry vacated the position to host alongside Matt Lauer in June 2011.

Now, as Savannah Guthrie succeeds Curry as co-host, Morales may be eyeing the door.

Morales is reportedly none-too-happy about being “passed over” for the plum role.

Reportedly, Morales believes she has been passed over not once, but twice.

RadarOnline claims the first time blood started to boil was back in 2011, when popular host Meredith Vieira left and Curry replaced her.

Apparently, Morales thought the gig was hers — so you can imagine how that is going over, now that she’s been allegedly snubbed a second time around.

RadarOnline is also reporting that Matt Lauer’s wife may have had something to do with Morales not getting promoted.

Allegedly, Lauer and Morales have been a little too friendly as co-workers.

Lauer’s wife, Dutch model Annette Roque, was reportedly not down with the prospect that her husband’s mistress would be his on-air sidekick as well.

And, you may recall, Matt has long been at the center of cheating scandals.

In fact, it’s been widely reported that Roque almost left the veteran TV host over the following alleged trysts:

— In 2006, over supposed hanky-panky at the Winter Olympics in Turin, Italy

— In 2010, this time over alleged indiscretions at the Winter Olympics in Vancouver

If this is true, NBC, please keep this guy away from impending Olympics coverage from here on out!

As if these details aren’t enough, RadarOnline also reports that Lauer fathered a child with Morales.

The Today hosts have denied the affair rumors.

In fact, Morales was very open about her “happy marriage” when it was first announced she would be a contributor for the short-lived show The Marriage Ref.

Do you think there is more to Natalie’s “snub” than meets the eye? Or is she just not right for the co-host gig?