The U.S. Anti-Doping Agency is wagging its metaphorical finger at U.S. soccer standout and Dancing with the Stars alumnus Hope Solo. The star tested positive for a “banned substance.” What was it? And is she out of the Olympic Games? 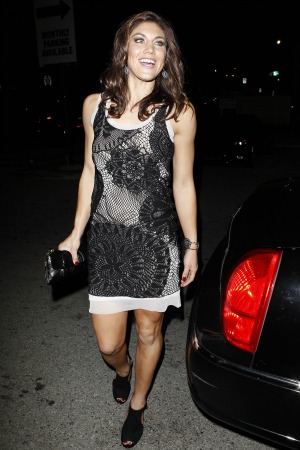 According to the World Anti-Doping Agency, it’s a diuretic that not only flushes the body of excess water weight but, perhaps more important, is used to “dilute the urine” sample used for the drug test and “mask the effects of other illicit drug use.”

So what does Solo have to hide?

If there was “anything” worth hiding for the straight-arrow goalie, who motivates her more than 420,000 Twitter followers to “get fit,” it was the private details regarding the (totally legit) presence of Canrenone.

Solo unveiled that the diuretic was in a medication prescribed by her doc for “pre-menstrual purposes.”

Solo said that she “did not know contained a diuretic.”

So this ain’t no never-ending Lance Armstrong “Did he?” or “Did he not?” fiasco.

If anything, it’s interesting to see the lengthy list of substances banned by the the agency, and how they can present themselves as a legit use.

“Once informed of this fact, I immediately cooperated with USADA and shared with them everything they needed to properly conclude that I made an honest mistake, and that the medication did not enhance my performance in any way,” she continues.

Apparently, the story checked out. Solo will not miss any pre-Olympic matches as the start of the Summer Games approaches.