Michael Phelps fat? Don’t shoot the messenger! The decorated Olympian himself makes the allegation, explaining what caused him to gain 25 pounds and who so bluntly pointed out his softening midsection. 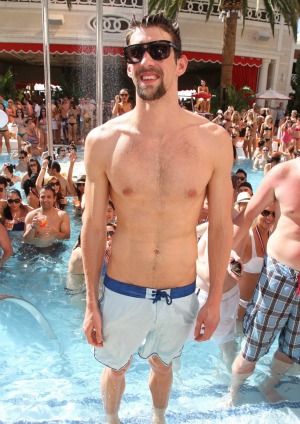 Michael Phelps and “fat” aren’t two words the public at large would normally associate together. However, close followers of the 16-medal winning Olympian may have noticed a few physical changes taking place after the swimmer’s memorable 2008 winning streak.

It turns out that while Michael Phelps has superpower strength in the pool, on dry land he’s as human as the rest of us — prone to workout slumps and consequential weight gain.

“At that point, I just didn’t have anything,” the man nicknamed Flying Fish said of the time after the Beijing 2008 Olympics. “It was weird going from the highest of the high, the biggest point of your life — winning eight gold medals — and then saying, ‘All right, where do I go from here?'”

Michael Phelps, whose fit weight is just 185 pounds on his 6-foot-4-inch frame, continued to explain to Details magazine, “I wasn’t motivated. I did nothing, literally nothing, for a long time. I gained 25 pounds. A friend of mine and I were playing football on the beach in Miami, and somebody got a picture of us and put it all over the place. And he’s like, ‘Bro, you gotta start working out, man. You are fat.'”

As for what brought the motivation back — aside from a blunt reality check from his bro-friend — Michael Phelps went on to share, “I realized that I probably hadn’t reached my full potential. There was still more in the tank. As I come to closure on my career, am I going to look back in 20 years and say, ‘What if?’ That’s something I don’t want. This is it.”

“I’ve always said I wouldn’t swim past 30. I don’t want to be that guy who’s hanging on, but I want to reach my max potential. I don’t care how much pain I have to go through or the sacrifices I have to make. I’ll get it.”

Are you surprised to hear of Olympian Michael Phelps’ weight woes?